The Asia shares held a tight range on Monday with worries over the rising tensions between China and the United States weighed on sentiments, even though recovery signs in the industrial activity in China’s capped losses. 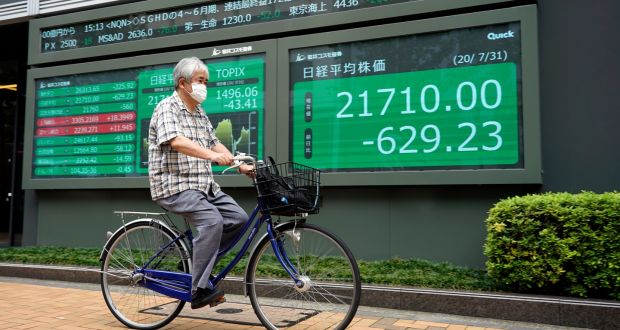 Technically speaking, the European markets seem set to open in the positive zone, with the EUROSTOXX 50 futures climbing up 0.77%. The FTSE futures also climbed 0.71%, whereas the S&P 500 index rose 0.19%.

The MCSI’s broadest index of the Asian stocks outside japan seesawed between green and red, remaining below the 6.5-month peak that was touched last week. The Singaporean and Japanese markets remain closed for the upcoming public holidays.

Investors remained circumspect after President Trump signed the executive order banning WeChat, a messenger app that is owned by Tencent, a tech giant based in china and Tiktok in the next 45 days. The Trump administration also announced sanctions on 11 Hong Kong and Chinese officials.

Rounding out these actions, the U.S regulators further recommended that the overseas companies listed on the US exchanges be subjected to public audit reviews.

The question for these markets remains whether such actions will adversely affect the China-US trade relations with the markets looking close for the Chinese retaliation.

Beijing’s blue-chip CS1300 was down the shade and China’s Hang Seng index dropped after a high profile media tycoon was arrested in Hong Kong under the new national security legislation.

With the escalating US-China relations, relying heavily on the sentiments, data showing the slowing in China’s factory depreciation improved hopes of better economic recovery in China.

Beijing’s industrial output is slowly returning to the levels that were seen after the pandemic paralyzed huge economy swathes, as the pent-up demand, state stimulus, and the surprisingly buoyant exports drive the recovery.

With regards to the currencies, the JPY and dollar dropped against the haven-linked JPY to 105.79 whereas the risk-sensitive Australian dollar reeled after dropping 1.1% back on Monday.

This left the USD index at 93.35 after it struggled on the steep slope since June as US Dollar Gains Amid COVID-19 Relief Uncertainty, Capped by Mixed Data.

Weighing heavily on the dollar is the uncertainty over the economic stimulus after Trump signed an array of executive orders demanding the extension of jobless benefits after discussions with the congress stalled.

This order will add $400 every week in jobless payments, which is less than $600 that was passed earlier on in the COVID-19 crisis.

Although the analysts see this move as a cut to expenditure that leaves renters and homeowners vulnerable to eviction, there is still hopeful about the availability of more fiscal stimulus.