On Tuesday, the Asian stocks surged on relief that a new round of US-China tensions appears not to have affected the trade, while new hopes for USA stimulus lent more support to commodity currencies and oil. 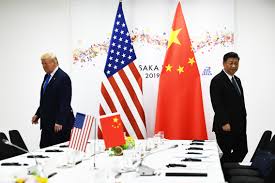 The MSCI’s broad index of the Asia-pacific shares outside Tokyo was previously high 1%. Also, Nikkei 225 returned from the holiday with the 1.7% surge led by industrial and healthcare stocks as the Hang Seng climbed 2.2%.

The risk-sensitive New Zealand and Australian dollars each climbed 0.3%, even though they held steady under the latest milestone peaks with some trepidation muting the rise.

Investors are currently waiting for the meeting between top Chinese and U.S top officials to be held on Saturday. The meeting’s main agenda will be to assess the initial 6 months of phase 1 trading deal.

With the Chinese lagging far behind on farm goods and energy purchases from the US, it might be testing the market’s presumption that this trade relationship is cushioned from the failing diplomatic ties between these two major economies.

On Tuesday, there was lots of relief that Beijing’s sanctions on 11 USA citizens, the response to the USA sanctions on china officials over china’s crackdown in passing the national security law in Hong Kong seemed to mark an end to the final round of these tit for tat games.

The safe havens were under lots of pressure. The Gold XAU dropped about 0.6% to trade at $2,015 per ounce and the United States bond market further extended, the latest selloff with the benchmark yield 10-year treasuries at the 2-week high of about 0.5870%.

The S&P 500 inched ahead; the Dow Jones climbed 1%, whereas the Nasdaq 100 surged a little as traders trimmed a few technology holdings that favor value stocks.

The S&P 500 currently sits slightly below 1%, which is a fresh high hit back in February whereas, in Asia, the MSCI index is hovering around 2% of the January all-time high.

This shift has nudged valuations in Asia to a new peak, approximately 20% over the post-financial crisis average. However, Nomura’s Jim McCafferty from Hong Kong stated that the lofty levels could be justified by the incredible shift in the investor’s preferences.

The S&P 500 index climbed 0.3% and the oil traded strongly with hopes that the United States stimulus deal might be struck with the expectation of increasing demand in Asia.

Apart from kiwi and the Aussie, other currencies made slight gains on the US Dollar as the Japanese Yen dropped as Japan ‘s Negative Trade Balance of Goods Gives the British Pound an Opportunity to Rise Against it.