AUDJPY is forming lower highs and finding support at 65.00 to create a descending triangle pattern on its 1-hour chart. Price is currently testing resistance and might be due to move back to support next.

The 100 SMA is below the 200 SMA for now to indicate that the path of least resistance is to the downside or that the top of the triangle is more likely to hold than to break.

However, the gap between the moving averages is narrowing to reflect weakening bearish momentum and a potential crossover. If that happens, price could break past the triangle resistance and climb by the same height as the formation, which spans around 250 pips.

Volume has been subdued, signaling that traders might be waiting for the next set of catalysts before deciding on a direction. Sustained market interest on a break above 67.00 could confirm that the rally has legs. ADX is above 25 to indicate that trending market conditions could stay in play.

Stochastic is pointing lower after recently making it to the overbought region, suggesting that sellers are taking over while buyers take a break. 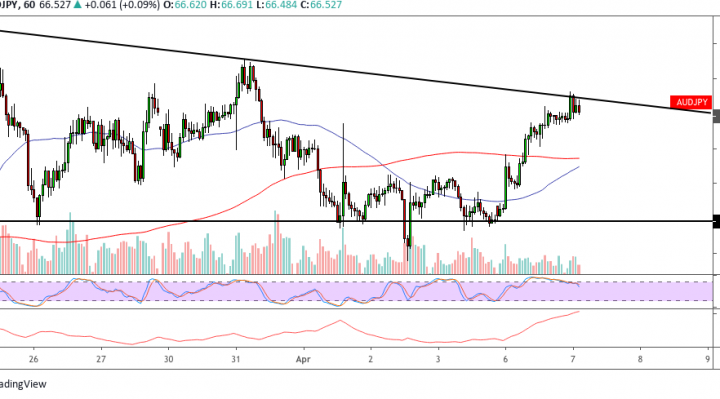 The Aussie drew some support from risk appetite late last week as traders seemed optimistic about the coronavirus outbreak being contained and the possibility of talks among global oil producers.

However, indications that the negotiations could be pushed back and that Saudi Arabia refuses to make concessions could still keep risk-taking in check. Apart from that, worsening headlines on the contagion could also hurt business sentiment for much longer, which could mean another flight to safety.

The RBA is due to make its monetary policy decision later today but no actual changes to interest rates are expected since the central bank already announced cuts over the past month.