AUDJPY is starting to form a bullish channel on its 4-hour time frame and is currently testing the resistance. If this keeps holding, a pullback to the nearby support levels could be needed to generate more bullish energy.

Applying the Fibonacci retracement tool on the latest swing low and high shows that the 38.2% level lines up with the mid-channel area of interest while the 61.8% level is closer to the channel bottom. The line in the sand for a correction would be around the 73.00 major psychological support, as a break below this could mark the start of a reversal.

The 100 SMA is still above the 200 SMA to confirm that the path of least resistance is to the upside or that the climb is more likely to gain traction than to reverse. Price has broken below the 100 SMA dynamic inflection point, though, so there may be a bit of selling pressure in play. The 200 SMA lines up with the 50% Fib to add to its strength as support.

RSI is heading lower to indicate that sellers have the upper hand, but the oscillator is approaching oversold conditions to signal exhaustion. Stochastic is also on the move down but dipping into the oversold region to show that sellers could use a break and let buyers take over. In that case, a move back up to the swing high at 75.70 or the channel top at 76.00 could follow. 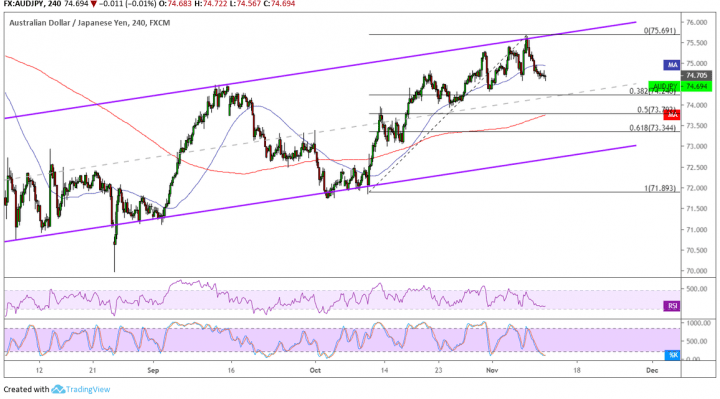 The Aussie has its employment report to watch out for this week as another disappointing read could reinforce RBA rate cut hopes. However, it’s also worth noting that central bank officials don’t seem to be inclined to ease any further for now.

Also, the mood in US-China trade talks could have a huge impact on Aussie price action as the prospect of a deal being signed this month could boost the higher-yielding commodity currency.