AUDJPY failed in its last couple of attempts to break past the 76.50 minor psychological mark, creating a double top on its 1-hour chart. Price has yet to test the neckline and close below it to confirm that a selloff is underway.

If that happens, AUDJPY could slip by at least 75 pips or the same height as the chart formation. The 100 SMA is still above the 200 SMA, though, so the path of least resistance is to the upside. In other words, support is more likely to hold than to break, especially while the gap between the moving averages continues to widen.

RSI is still heading south, though, so selling pressure is in play. The oscillator has room to move lower before reflecting oversold conditions, so bears could stay in the game for a bit longer. Stochastic is also heading lower, so price could follow suit while sellers have the upper hand. Reaching the oversold region and turning back up could mean that buyers are taking over. 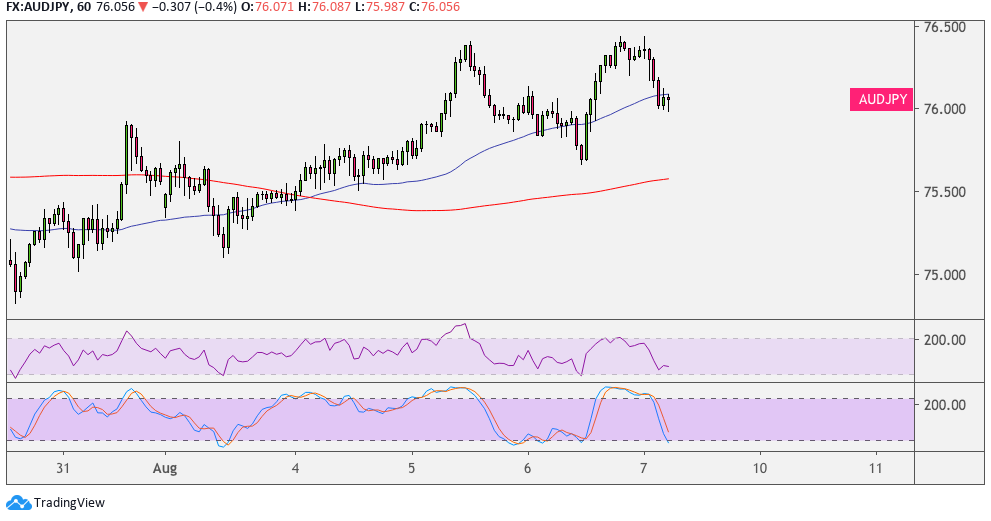 The Aussie might have some bullish pressure going for it as the latest round of data from China has been stronger than expected. Then again, the RBA statement highlighted the downside impact on the Australian economy of the pandemic, suggesting that it could take a while before a rebound is observed.

Meanwhile, the yen could take its cues from overall market sentiment and dollar direction. The upcoming NFP release could take care of all this later today, as another upbeat reading could bring risk-on flows back in the financial market.

On the other hand, a large drop in hiring could discourage traders from buying up higher-yielding currencies like the Aussie while weighing on dollar demand, effectively rendering the yen as the preferred safe-haven alternative.