AUDJPY has formed higher lows and slightly higher highs to trade inside a rising wedge pattern on its 1-hour time frame. Price is currently testing support and might be due for another bounce to resistance.

The 100 SMA is above the 200 SMA to signal that the path of least resistance is to the upside or that support is more likely to hold than to break. In that case, the pair could recover to the 72.00 handle in the near-term.

A break below the wedge support around 71.30 could set off a dip to the 200 SMA dynamic inflection point around 71.00 or a selloff that’s at least the same height as the wedge. This chart pattern spans 68.50 to around 72.00, so the resulting drop could be around 350 pips.

RSI is slowly treading lower to show that there is still some selling pressure left, and the oscillator has room to move down before reflecting oversold conditions or exhaustion among sellers. Stochastic is also moving south, so price could follow suit while sellers are in control. 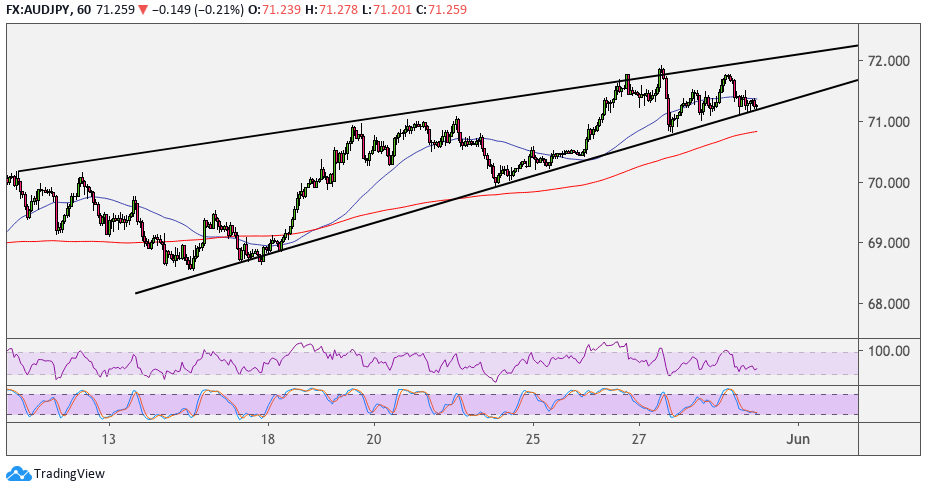 The Aussie has drawn support from a pickup in risk-taking over the past weeks as market watchers focus on the possibility of a vaccine being developed soon and the fact that more states and nations are emerging from their lockdowns.

Earlier today, the Japanese economy printed a handful of downbeat economic figures, but these seemed to support the safe-haven currency rather than drag it down. Preliminary industrial production, retail sales, and housing starts all came below expectations.

Risk appetite could remain shaky over the weekend as the conflict between the US and China is still in play. Many fear that this could result to another wave of trade troubles, which would mean more headwinds to business and consumer activity in the coming months.