AUDUSD could be in for a reversal from its selloff as it completes a double bottom formation on the 4-hour time frame. Price is due to test the neckline around the .6900 and a break higher could set off a climb that’s the same height as the pattern.

However, the 100 SMA is below the 200 SMA to indicate that the path of least resistance is to the downside. In other words, resistance is more likely to hold than to break.

Then again, the gap between the indicators has narrowed to reflect weakening bearish pressure and a potential bullish crossover. Price is trading above both moving averages, so these could hold as dynamic support.

RSI is already in the overbought zone to signal exhaustion among buyers and a possible return in selling pressure once the oscillator moves back down. Stochastic is also indicating overbought conditions and might turn south, so price could follow suit. In that case, a move back to the bottoms around .6700 might follow. 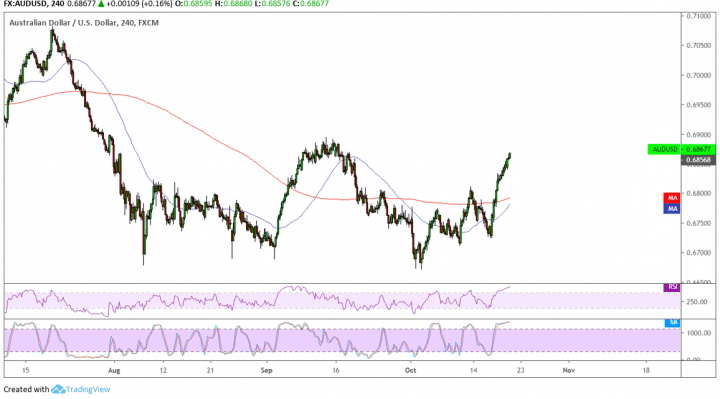 Surprisingly the Aussie had a positive start to the week even after China reported weaker than expected growth data late last week. Risk appetite has been on the commodity currency’s side as geopolitical risks from trade tensions and Brexit issues faded then.

Indications that more progress is being made in trade negotiations between the US and China could be responsible for the Aussie’s gains so far this week, especially since there is also chatter that the FOMC could be gearing up for another rate cut before the end of the year.

There are no major reports due from both Australia and the US this week, although the latter’s durable goods orders report might be worth watching. Other than that, major shifts in sentiment could determine this pair’s direction next.