AUDUSD has formed a head and shoulders pattern on its 4-hour time frame to indicate that a reversal from the uptrend is due. Price appears to have broken below the neckline support around .6900 as well, so a selloff of the same height as the pattern might follow.

The chart formation spans .6900 to around .7000, so a 100-pip drop might take place next. The 100 SMA has crossed below the longer-term 200 SMA to indicate that the path of least resistance is to the downside or that the downtrend is likely to gain traction from here. Price is moving below both moving averages as confirmation that selling pressure is present.

RSI is treading sideways to reflect consolidation while stochastic is pointing down to indicate that sellers have the upper hand. The latter has room to move south, so price could keep following suit before oversold conditions are seen. 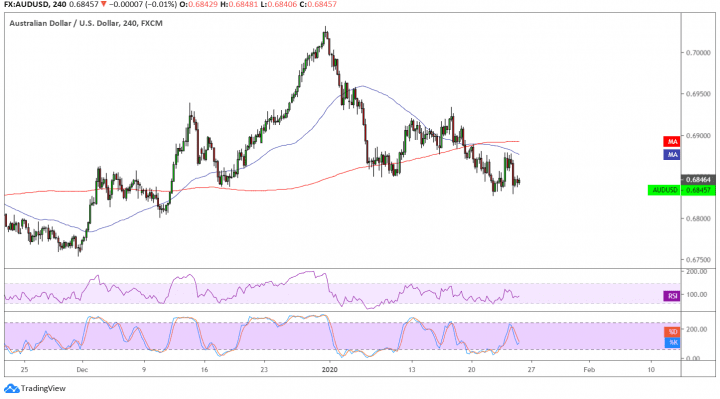 Earlier in the week, the Australian economy printed stronger than expected employment data, enough for analysts to pare rate cut expectations for the upcoming statement. However, it seems that market sentiment is taking a greater toll on the higher-yielding commodity currency, as the virus in China is dampening risk appetite.

There are no major reports due from both the US and Australia for the rest of the week, and the Lunar New Year holidays could set the stage for weekend gaps. More fatalities related to the coronavirus could keep traders wary of an outbreak that could take a chunk of Chinese GDP and possibly global growth.

In that sense, the Aussie could take a larger hit while the safe-haven US dollar could enjoy stronger demand, which might provide enough momentum for a downtrend in AUDUSD.