AUDUSD Ready for a Triangle Breakout

AUDUSD has formed lower highs and higher lows to consolidate inside a symmetrical triangle on its 4-hour chart. Price is bouncing off support and looks due for a test of the triangle top around the .6950 minor psychological mark.

The 100 SMA is above the 200 SMA to indicate that the path of least resistance is to the upside or that the climb is more likely to gain traction than to reverse. However, the gap between the moving averages is narrowing to reflect weakening bullish momentum and a likely bearish crossover.

If that happens, price could tumble below support at the .6850 mark and go for a drop that’s at least the same height as the chart formation, which spans around 300 pips. For now, though, the 100 SMA is holding as dynamic support, and the 200 SMA could have some buyers waiting there as well.

RSI still has some room to climb before indicating overbought conditions, so price could follow suit. Once the oscillator reaches the overbought zone and turns lower, selling pressure could return and push for a prolonged decline.

Similarly stochastic is also moving up but nearing the overbought zone to signal potential exhaustion among buyers soon. 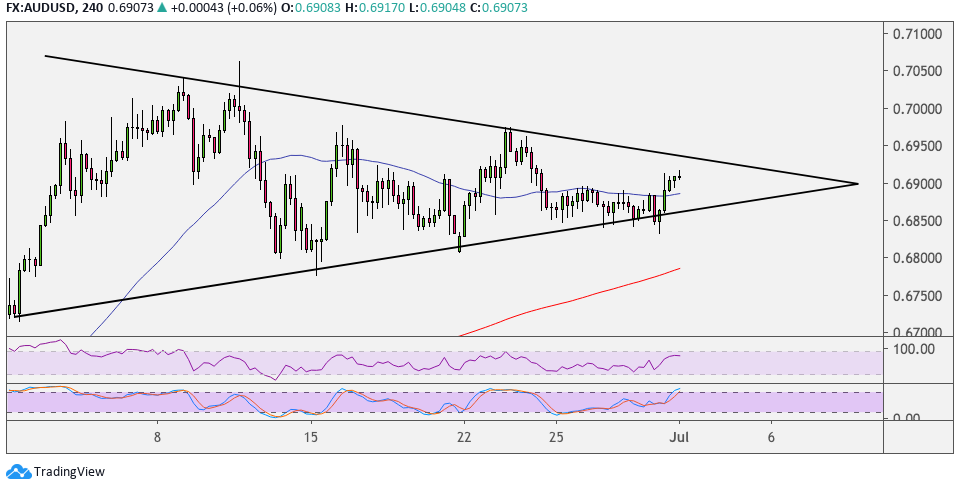 Earlier today, the Australian economy reported a larger than expected drop in building approvals, signaling weaker sentiment in the construction industry. However, stronger than expected Chinese manufacturing PMI from Caixin gave the Aussie a boost as the index climbed from 50.7 to 51.2 to reflect faster business expansion.

Meanwhile, the US dollar is waiting on the NFP data due on Friday as another large increase in joblessness is eyed. Leading indicators like the ADP non-farm employment report are due soon and could provide hints on how the official jobs numbers might turn out. The jobs components of the ISM PMI readings could also serve NFP clues.