AUDUSD has formed higher lows and slightly higher highs to trade inside a rising wedge pattern on its 1-hour chart. Price is testing resistance and could be due for a dip to support next.

The 100 SMA is in line with this wedge bottom to add to its strength as a floor, and is also above the 200 SMA to confirm that the path of least resistance is to the upside or that the climb is more likely to resume than to reverse. The gap between the indicators is widening to reflect stronger bullish momentum.

RSI is heading south to show that bearish momentum is in play, and the oscillator is about to cross the center line to reflect a pickup in selling pressure. Stochastic is also heading south, so price could follow suit while bears have the upper hand.

A break below support around the 0.6100 mark could set off a drop that’s the same height as the chart formation. 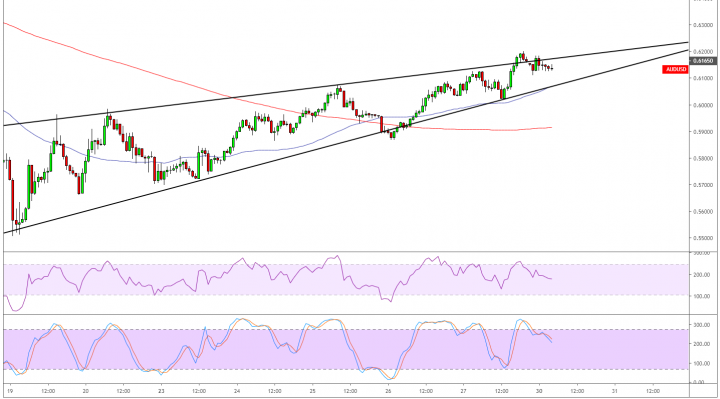 The Australian dollar was able to benefit from a pickup in risk appetite last week as traders were focused on the stimulus efforts being made by governments and central banks. However, this positive sentiment might not last very long as more and more confirmed cases and fatalities are being reported, suggesting that the outbreak is far from being contained.

Then again, the US dollar appears to be on weak footing as the Trump administration is not doing enough to limit the contagion. This could render the government’s recently approved stimulus package useless as more businesses could be crippled and the stock market could see further losses from here.

The Aussie might be able to benefit from the rally in gold as well, as the precious metal tends to act as safe-haven in times of market crisis.