Fresenius Medical Care AG & Co. (NYSE: FMS) stock lost over 0.3% in the pre-market session of 21st Feb, 2020 (Source: Google finance). Medical Care has reported fourth-quarter net income to EUR343 million, which is decline of 25% on the previous-year period. However, on an adjusted basis net income grew by 3%.

The company expects net income to increase in 2020 after strong growth in its dialysis business, and in its infusion drugs unit in emerging markets, helped it to just beat fourth quarter expectations. Dialysis division of Fresenius Despite some softness in North America, group fourth-quarter has reported adjusted operating income came in at 1.29 billion euros (1.08 billion pounds), which is slightly above the 1.25 billion euros expected on average by analysts in a company-provided consensus. 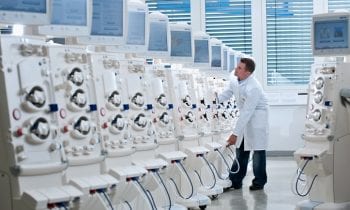 FMC expects home dialysis to be in the range between 25% and 30% of treatments in the U.S. by 2025, up from 13% now. Fresenius expected 2020 net income to rise in the range of 1% and 5% in constant currency terms and confirmed mid-term forecasts, saying growth, efficiency improvements and its biosimilars business should all bolster earnings. In 2020, the company expects sales to grow in the range of 4%-7%. This is without taking into account the effect of the coronavirus outbreak, which is, however, anticipated to be minimal.

Meanwhile, FMS has announced a joint venture between Kabi and Swiss rival Vifor Pharma to provide iron deficiency treatments in China, in which it will retain a minority 45% stake, with Vifor Pharma. The new business will offer patients with iron deficiency access to blood management treatments. In China, which is the world’s fastest-growing dialysis market, FMS has invested in expanding production capacities, research and development activities as well as in strengthening its services business, that has almost doubled with now 11 clinics. The group’s Helios hospital division, which has continued to stabilise in Germany and grow in Spain, will keep looking for opportunities to expand this year after making several acquisitions in Colombia

Additionally, between March and December 2019, the company had bought back 8.9 million own shares at a total purchase price of EUR 600 million. The Company intends to use its residual authorization of EUR 400 million over the course of 2020. The company plans to propose a new record dividend of EUR 1.20 per share, corresponding to a total payout of EUR 358 million, to the Annual General Meeting in May 2020.