Bitcoin decreased a little today and continues the extended sideways movement. It is almost to reach a very strong dynamic resistance. Price is still located much above the 6000 psychological level after several failures to reach it. However, it is still premature to talk about an upside movement at this moment as long as the rate it fails to breakout above the near-term resistance levels.

Personally, I still believe that we may have a significant movement very soon after this range, but it remains to see the direction. 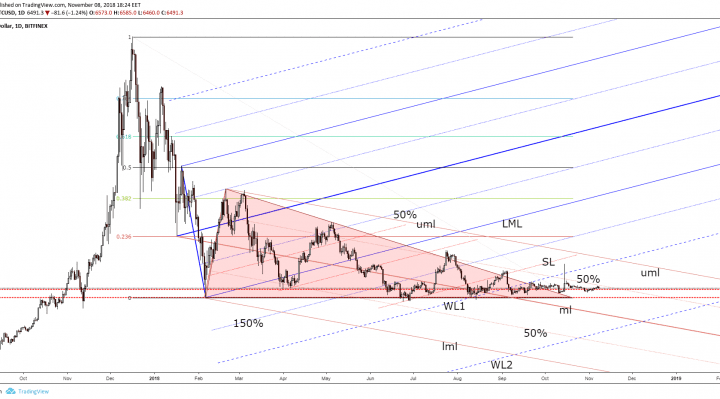 You can see that the rate stays above the 6425 static support and much above the 6000 psychological level. I’ve told you in the last weeks that only a valid breakdown below the 6000 level it will announce a larger drop. Price has moved away from the median line (ML) of the descending pitchfork, signaling that we have an oversold and that the rate could start another upside movement. It remains to see what will really happen because the rate has failed to move towards new highs, so it could still drop anytime.

You can see that the rate has failed to stay and stabilize above the 50% line, so a valid breakout could announce a potential broader upside movement. It remains to see what will happen and if the rate will approach and reach the WL1 again because another false breakout or a failure to reach it could send the rate down very quickly. A valid breakout above the WL1 and above the upper median line (uml) it will announce a larger upside movement on the medium to the long-term.