Bitcoin Breaks $9.3K But Gives No Hope of Bull Run

Bitcoin was trading higher on Tuesday as European Union leaders finalized a €750bn pandemic recovery fund to aid their economy through further damage.

The leading cryptocurrency climbed 2.31 percent during the New York session, taking its short rally above the $9,300-mark for the first time in a week. Its gains also followed similar upside moves across the altcoin market, with Ethereum, XRP, Cardano, and others rising by 1-3 percent.

Bitcoin’s move uphill also helped its price coming out of a Symmetrical Triangle range. The cryptocurrency had been failing to close above or below the said structure since June 1. But entering July 21, it broke above the Triangle’s resistance, raising possibilities of a full-fledged breakout in the coming sessions. 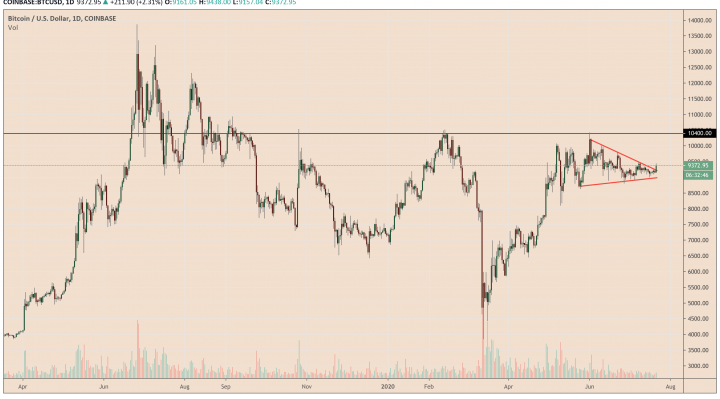 Bitcoin price breaking out of the ‘red area.’ Source: TradingView.com

At least that is what Josh Rager saw, albeit fundamentally. The crypto market analyst said that Bitcoin should rise further because every other global asset is rallying, as well. He was pointing to the US and European stocks – as well as gold and silver – which also rose like Bitcoin on Tuesday.

“I understand the bearish possibility for a BTC pullback to $7k as the key area to break is $10k,” he noted. “But every other market is moving up. So why is Bitcoin an outlier that is just going to dump 30% while everything else is doing the opposite? I remain neutral but don’t overthink this.”

A successful triangle breakout puts Bitcoin en route to $11,000 based on a technical definition. It says the price would move in the direction of its previous uptrend following a break above its resistance. Meanwhile, the length of the upside move would be as much as the height of the Triangle.

Meanwhile, a fake breakout, or fakeout, would have traders first test the Triangle support as their Short target. Traders should, therefore, look for the signs of a pullback accompanied by a rise in volume. Mr. Rager sees Bitcoin falling to as low as $7,000 should a sharp downside correction appear.

“I remain neutral until $10k breaks,” the analyst added.