Bitcoin is slowly trying to regain its ground as it forms higher lows and trades inside an ascending channel on its 1-hour chart. Price could be due for a move up to the resistance at $7600 or at least until the mid-channel area of interest at $7200.

The 100 SMA is below the longer-term 200 SMA to signal that the path of least resistance is to the downside. This suggests that the selloff is more likely to resume than to reverse. The 100 SMA is also holding as dynamic resistance at the moment and could still push price back to support or below it. However, the gap has narrowed enough to hint at a potential upward crossover and return in bullish momentum.

Stochastic is on its way down to indicate that selling pressure is present and that a breakdown might be possible. RSI is also turning lower without even reaching overbought levels, another indication that bears are eager to return. 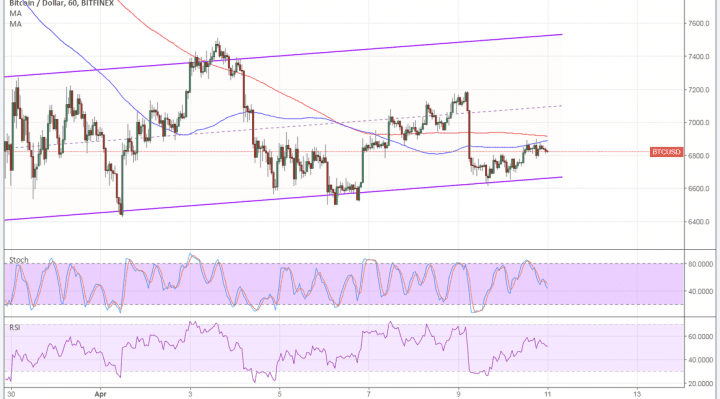 Bitcoin has drawn support from news that big hedge funds are investing or preparing to invest in the cryptocurrency space but has been weighed down by the upcoming tax deadline. Profit-taking appears to be in play for the next few days while investors crunch the numbers on their holdings, but positions could be reopened soon after.

Meanwhile, the dollar is also being supported by cooling trade tensions between the US and China. Both parties have expressed willingness to pursue trade talks, a welcome break from firing one set of higher tariffs after another. Then again, this could boost risk appetite enough to support riskier assets like cryptocurrencies later on.

US PPI beat expectations, setting positive hopes for the upcoming CPI release. FOMC minutes are also due today and could provide indications for future policy direction, thereby setting the tone for USD as well. Hawkish commentary could keep the dollar supported against bitcoin.