Bitcoin price made higher lows and lower highs to create a symmetrical triangle on its 1-hour chart. Price bounced off support and is on its way to test the resistance near the $7000 major psychological level.

If this level keeps gains in check, price could head back to support around $6800. A break higher, on the other hand, could lead to a rally of the same height as the chart formation, which spans $6500 to 7800.

RSI is moving north to show that buyers are in control. Stochastic is also heading higher so bitcoin price could keep following suit. However, both oscillators are closing in on overbought levels to reflect slowing buying momentum. A downside break from support could lead to a drop of the same height as the chart pattern as well. 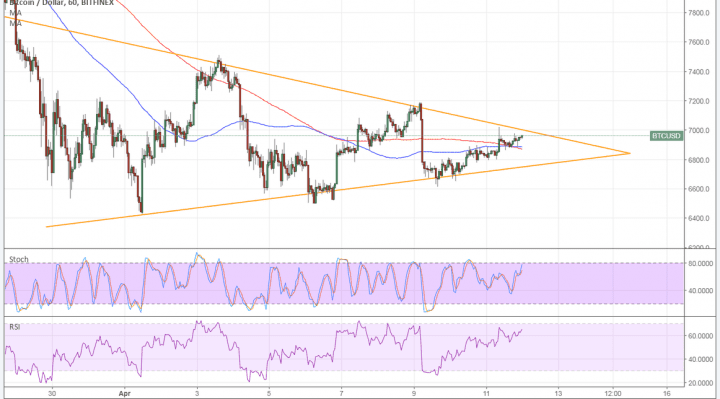 Dollar demand is slowing due to geopolitical risks facing the US, particularly when it comes to the threat of military airstrikes on Syria as this could have repercussions on the home front. Besides, trade war fears are not completely out the window yet until trade talks begin or come up with something fruitful.

US CPI has also disappointed, preventing dollar bulls from charging strongly on more hawkish FOMC rhetoric as indicated in the minutes of their latest policy meeting. This suggests that there’s still a lot of doubt surrounding the Fed’s tightening plans as policymakers also warned that trade tensions pose risks.

As for bitcoin, the cryptocurrency appears to be banking on risk-off flows once more while traders are hesitant to buy the dollar and demand for riskier assets has taken a hit.