Bitcoin is showing some bullish signals after recently trading below a descending trend line and attempting to break above it. Price is still hitting a ceiling at the 100 SMA dynamic inflection point, though, and holding as a ceiling could still push BTC/USD below the trend line to resume the drop.

The 100 SMA is below the longer-term 200 SMA to indicate that the path of least resistance is to the downside. This suggests that the selloff is more likely to continue than to reverse. In addition, the gap between the moving averages is widening to reflect strengthening bearish momentum.

Stochastic is also turning down from the overbought level to signal that sellers have the upper hand. The oscillator has plenty of room to head south so bitcoin could follow suit and revisit the latest lows near $6400 or create new ones. 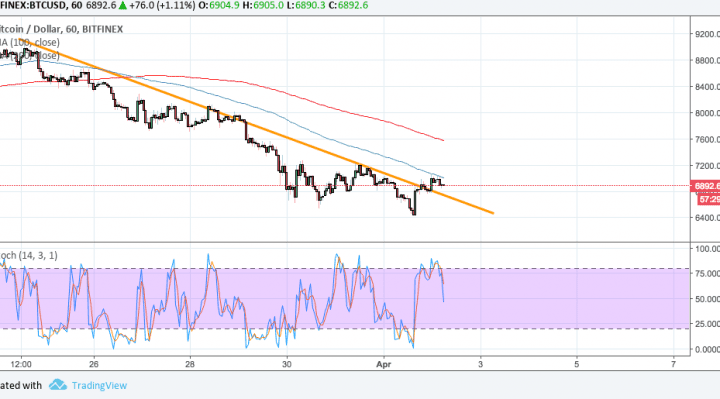 Bitcoin has been off to a weak start for the quarter as it finished the previous one on a very low point. Headlines haven’t been so upbeat, with nations like Chile and Kazakhstan taking an adverse stance against cryptocurrencies, keeping regulatory fears in play.

It doesn’t help that Google and Twitter are moving to ban cryptocurrency ads on their platforms, which would make it more challenging to sustain interest in the industry and encourage new accounts. This could weigh on volumes and liquidity moving forward, leading some investors to liquidate their holdings earlier on.

Meanwhile, the dollar has been supported by risk-off flows, along with easing fears about a trade war with China. The Fed also hiked interest rates last month, shoring up dollar demand, and has signaled room for further tightening for the year.

The NFP report due this week could contain more clues on the pace of monetary policy changes, with strong data likely leading to more dollar gains and weak data dampening the rallies.