Bitcoin looks prime for a break below its descending triangle bottom to expose the cryptocurrency to more losses. The chart pattern spans $6,000 to $12,000 so the resulting drop could be of the same height.

The 100 SMA is below the longer-term 200 SMA on the daily time frame to signal that the path of least resistance is to the downside. This means that support is more likely to break than to hold. In the event of a bounce, bitcoin could hit resistance at the triangle top that lines up with the 200 SMA dynamic inflection point or the 100 SMA just close by at $7,000.

RSI is already hovering at oversold territory, though, so there may be some selling exhaustion in play. If bears take a break and let buyers take over, the triangle could continue to hold and keep bitcoin in consolidation. Stochastic has also reached oversold levels to show that sellers might need to take it easy from here. However, the oscillator has yet to turn higher to reflect a pickup in bullish momentum. 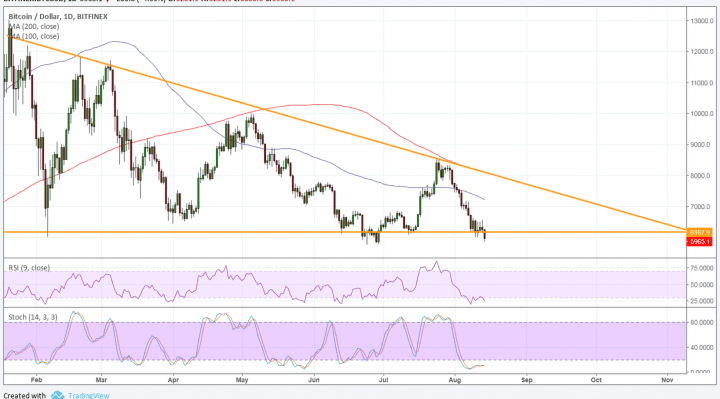 Bitcoin is under heavy selling pressure against the dollar since the latter is taking advantage of most of the risk-off flows in the financial markets these days. The flight to safety has been spurred by the crisis in Turkey as the country faces a rapidly depreciating currency, surging inflation, and higher tariffs on its steel and aluminum imports to the US.

Against the Turkish lira, bitcoin has drawn a lot of support while citizens rush to find a better store of value. This phenomenon has also been observed during aftermath of the Greek crisis as citizens also find a better means to facilitate transactions or higher returns on their investments. Moving out of traditional markets that are usually more vulnerable to these types of uncertainties has also fueled bitcoin demand in the past.