Bitcoin is trending lower on its short-term time frames, still stuck inside a descending channel since the start of the month. Price is also finding some support at the long-term floor around the $5,800 to $6,000 levels.

Traders appear to be holding out for more catalysts to see where price might be headed next. A move past the channel resistance could be enough to confirm that bulls are gaining more energy and could push for a reversal from the short-term drop. From there, the bounce could gain momentum enough to test the next inflection points, possibly at the 100 SMA dynamic resistance close to $7,000.

Do note that the 100 SMA is still below the longer-term 200 SMA so the path of least resistance is to the downside. In other words, support is more likely to break than to hold. Then again, the gap between the moving averages is narrowing to signal slowing bearish momentum.

RSI is also pulling higher after recently hitting oversold levels. This signals that buyers are returning and could push bitcoin up to the next upside targets from here. Similarly stochastic is climbing out of the oversold region to reflect a return in bullish pressure also. 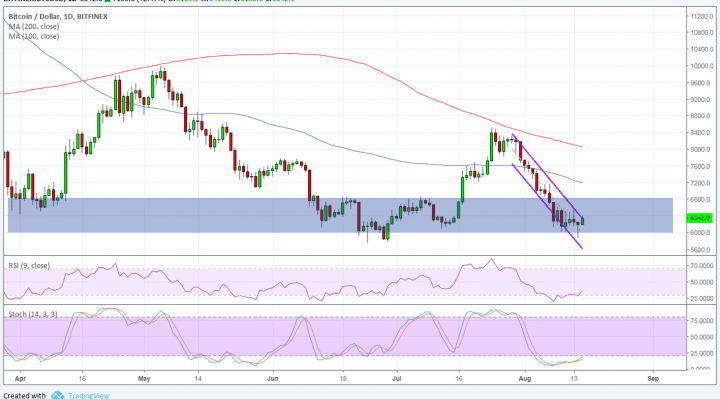 Bitcoin appears to have attracted some safe-haven demand from the crisis in Turkey as citizens might be rushing to find a better store of value than their depreciating currency. This has been observed in the aftermath of the Greek debt crisis as there was demand for alternative means for transactions or investments.

For now, the dollar is putting up a stronger fight in terms of safe-haven demand and is keeping bitcoin gains in check. It didn’t help that ex-PayPal CEO Bill Harris had negative things to say about bitcoin, citing in an interview with CNBC that “there’s just no value there” and that price could keep sliding close to zero.