Bitcoin continues to advance as it cleared the barrier at the mid-channel area of interest on its 1-hour chart. This suggests that price has a clear path towards the next resistance at the top of the ascending channel around $7,200.

The 100 SMA is above the longer-term 200 SMA to indicate that the path of least resistance is to the upside. In other words, the rally is more likely to resume than to reverse. The gap between the moving averages has recently widened to reflect stronger bullish momentum, and the 200 SMA lines up with the channel bottom to add to its strength as a floor.

However, RSI is in the overbought zone to signal exhaustion among buyers. The oscillator is starting to turn lower to indicate that sellers are returning and might push for another test of the channel bottom around $6,600. Stochastic has a bit more room to climb so buyers could stay in control, but the oscillator is also approaching overbought levels. 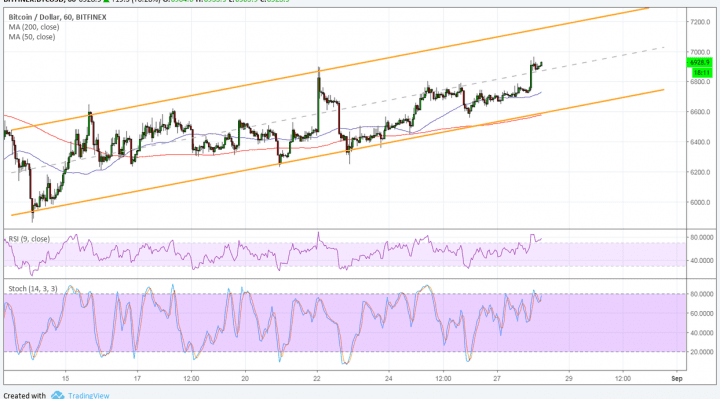 Bitcoin is drawing support from updates that the CFTC has seen a decline in short bitcoin futures positions, indicating that sentiment may be turning a corner for this digital asset. This could also allow bulls to sustain the much-anticipated rebound to record levels by the end of the year.

To top it off, bitcoin is also supported by improving risk appetite in the financial markets, which in turn is coming from the US-Mexico bilateral trade deal. Lifting some uncertainty of businesses has encouraged investors to take on more risk, which has been bullish for cryptocurrencies like bitcoin.

Whether the rallies are sustained depends on how the SEC decides on the pending bitcoin ETF applications next month. Recall that the regulator also decided to review its recent announcement to reject a few proposals also.