Bitcoin has broken below its rising wedge formation visible on the 1-hour time frame to reflect a pickup in selling pressure. Price has since completed its pullback to the broken support to show that the selloff is ready to resume.

However, the 100 SMA is still above the longer-term 200 SMA, so the path of least resistance is to the upside. This means that there’s still a good chance for the uptrend to resume, especially if the moving averages hold as dynamic support levels.

Stochastic is pointing down, though, which means that sellers are regaining the upper hand. RSI, on the other hand, is crawling higher but also moving sideways to signal potential consolidation. The chart pattern spans $13,000 to $20,000 so the resulting breakout could be of the same height. 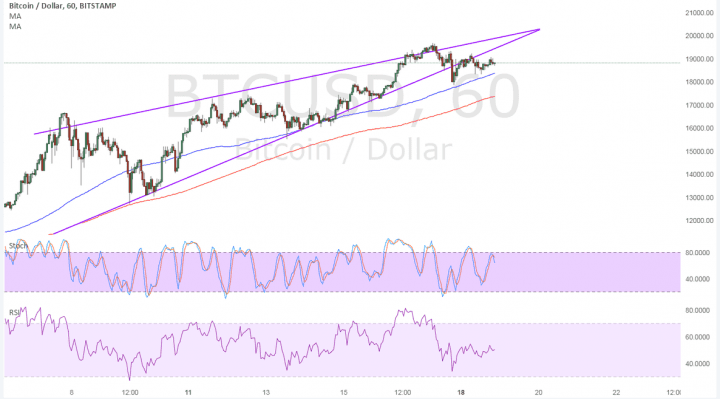 Note that the dollar is facing potential upside leading up to the tax bill vote in the US since this would mark a legislative victory for the Trump administration and also lead to a big boost to businesses and consumer activity. Lawmakers will vote on the final version of the bill today and possibly have it ready for Trump to sign into law before Christmas.

Apart from that, the US central bank seems prime for two or three interest rate hikes next year as the FOMC just recently upgraded their growth and employment forecasts. Inflation remains an issue, though, and Fed Chairperson Yellen warned that it could continue to run below target for much longer.

Meanwhile, bitcoin is also drawing support from the futures on the CBOE and CME. This has drawn stronger interest from institutional and retail investors, keeping volumes and activity elevated. Still, price is approaching a major psychological barrier at $20,000 and it might take a strong catalyst to trigger an upside break and the creation of new highs. Even so, a number of analysts have upped their bitcoin forecast to $30,000-40,000 for the next few months.