Bitcoin is currently trading at new highs around the $14,000 levels but might be due for a correction before heading further north. Applying the Fib tool on the latest swing low and high shows that the 38.2% retracement level could act as support.

This level lines up with an ascending trend line support connecting the lows since the start of the month. A larger pullback could last until the area of interest at the 50% Fib or the moving averages’ dynamic support at a previous resistance level.

Speaking of moving averages, the 100 SMA is above the longer-term 200 SMA so the path of least resistance is to the upside. This means that the rally is more likely to continue than to reverse.

However, stochastic looks ready to make its way down from the overbought level to reflect a pickup in bearish pressure. RSI is also making its way out of the overbought zone to signal that a correction is underway. Bullish momentum could pick up once both oscillators hit oversold levels and turn back up. 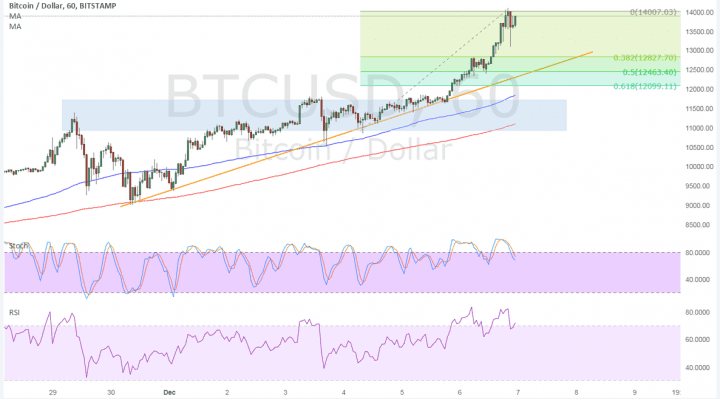 Bitcoin is enjoying strong demand these days as the launch of CBOE bitcoin futures approaches. This is expected to bring a boost to volumes and activity, which have typically resulted to strong gains in the past. CME is also scheduled to launch bitcoin futures the week after, and Nasdaq could follow in early 2018.

Barring any major setbacks, this would give retail and institutional investors better access to bitcoin and likely drive demand higher. However, three derivative products that would enable traders to short bitcoin are also in the pipeline.

As for the dollar, the currency appears to be taking its cue from tax reform updates, and developments have been mostly positive so far. The Senate and House are due to merge their versions of the tax bill and have it ready for Trump to sign. If all goes well before the end of the year, the dollar might be poised for stronger gains.