Bitcoin is still on its climb and has recently established new all-time highs yet again. However, a correction seems necessary before buyers can sustain the rally.

Price is currently testing an area of interest or former resistance around the $10750 level, which appears to have already held as support. This lines up with an ascending trend line connecting the lows since late last week.

The 100 SMA is also above the longer-term 200 SMA to show that the path of least resistance is to the upside. This means that the climb is more likely to resume than to reverse. The 100 SMA has also held as dynamic support on the recent pullback.

Stochastic is making its way higher to indicate that bullish pressure is returning. RSI is also moving up to show that buyers are regaining control and could even create new highs for bitcoin once more. 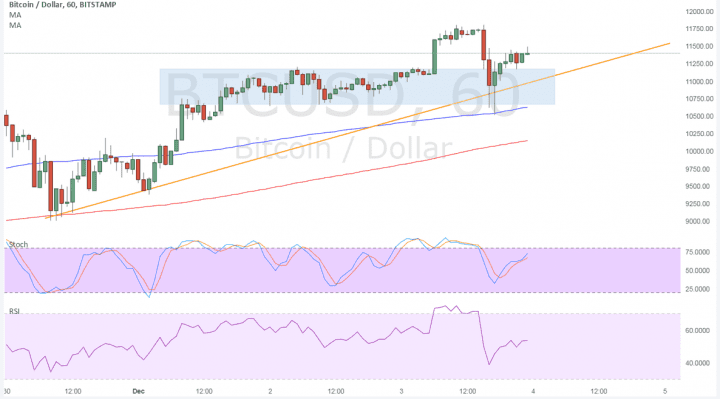 The US dollar has weakened across the board on reports of Flynn’s admission of guilt, which then supports the case of Trump’s dealings with Russia and potential interference during the elections. This could be grounds for impeachment but achieving such would be a challenge in a Republican-controlled house.

The focus could then turn to tax reform progress this week as positive developments could revive dollar strength. If so, bitcoin could be in for a deeper pullback from its ongoing climb.

Traders are also waiting for the release of three derivative products that could allow investors to short bitcoin. This might lead to a lot of profit-taking and short-positioning, which could then bring more volatility to the market. CME bitcoin futures updates are also likely to influence bitcoin movements since this would mean higher activity and volumes.

As for the dollar, the NFP report could also lead to big moves as it might seal the deal for a December hike and more tightening moves in 2018.