Bitcoin has recently broken above its descending triangle resistance to indicate that further gains are in the cards. A small double bottom and bullish flag can also be seen, both suggesting that buyers are ready to take control of price action.

The chart pattern is approximately $700 in height so the resulting rally could be of the same size, taking price up to the all-time highs and beyond. However, the 100 SMA is crossing below the longer-term 200 SMA to signal that the path of least resistance is to the downside.

This means that the upside break could prove to be a fakeout and that bitcoin could still attempt to move lower. Stochastic is heading down from the overbought zone to also reflect a pickup in selling pressure while RSI looks ready to head south without even reaching overbought levels. 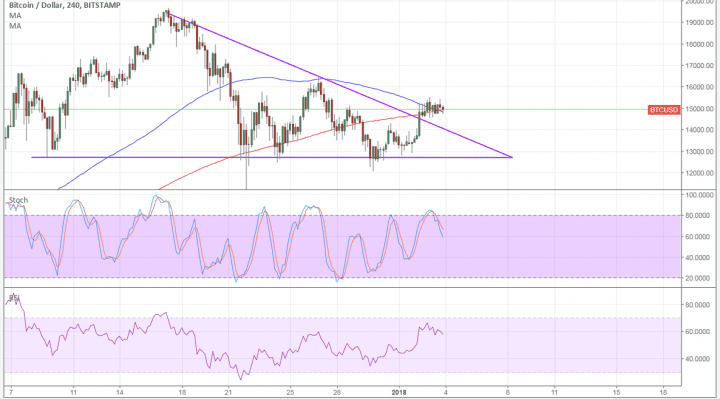 Dollar demand has picked up recently owing to the less downbeat December FOMC minutes released this week. Policymakers affirmed the likelihood of gradual rate hikes in the coming month but expressed concerns about weaker inflation. Still, several committee members shared the view that stronger employment could push up wages and overall price levels.

Meanwhile, the ISM manufacturing PMI beat expectations and showed a strong tick higher in the prices component. The jobs component dipped slightly but the large fall in inventories suggests that businesses could ramp up production to replenish customer stockpiles. The ADP non-farm employment change figure is due today and could provide clues on how Friday’s NFP might turn out.

As for bitcoin, the report that the Founders Fund placed a large bet on the cryptocurrency has proven positive. However, the South Korean government’s move to curb bitcoin trading in the country is still keeping a lid on gains. After all, the country is one of the top markets for bitcoin.