Bitcoin is slowly trending higher on its 1-hour time frame, moving inside an ascending channel and bouncing off support. Price appears to be stalling at the mid-channel area of interest before heading to the resistance.

The 100 SMA has crossed above the longer-term 200 SMA to indicate that the path of least resistance is to the upside and that gains are in the cards. These moving averages are close to the channel support to act as an extra layer of defense in the event of another dip.

Stochastic looks ready to make its way down from the overbought region to reflect a return in selling pressure. RSI has a bit more room to climb so a test of the channel resistance around $16,000 could take place before sellers return. 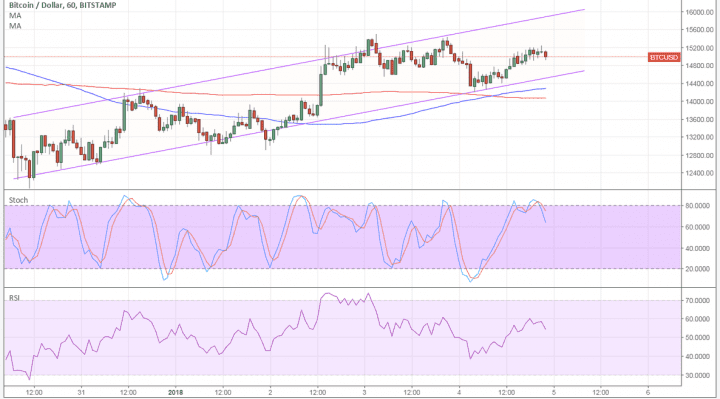 Bitcoin is still under some weight from the increased efforts to curb trading in a few nations like South Korea. This has taken its toll on volumes and led traders to look at cheaper alternatives like Ripple, which has been on a tear in the past few days.

Still, cryptocurrencies are able to advance against the US dollar, which appears to be snubbing positive data on growing doubts about the Fed’s tightening plans. The Challenger job cuts and ADP non-farm employment report printed strong results this week, spurring positive expectations for the NFP today, but it was Fed official Bullard’s doubts on the impact on inflation that kept a lid on dollar rallies.

Analysts are expecting to see a 190K increase in hiring from the NFP report, slower than the earlier 228K gain and with potential downgrades to boot. Weaker than expected results could lead to more dollar weakness, which bitcoin could take advantage of. On the other hand, impressive readings could shore up tightening expectations and lead to another test of the channel support.