Bitcoin might be done with its downtrend as price appears to be forming a reversal pattern on its 4-hour chart. Price could be creating an inverse head and shoulders formation but has yet to complete the right shoulder.

The 100 SMA is below the longer-term 200 SMA on this time frame, so the path of least resistance is still to the downside. In other words, the selloff is more likely to resume than to reverse at this point. Then again, bitcoin has moved above both moving averages and the gap has narrowed to signal weakening bearish pressure.

RSI is heading south so bitcoin might still follow suit. If support at the near-term area of interest around $6,200 holds, bitcoin could complete the other shoulder and move on to test the neckline at $6,800. A break higher could spur a rally of around $1,000 or the same height as the reversal pattern. Stochastic is also pointing down to show that sellers have control for now. 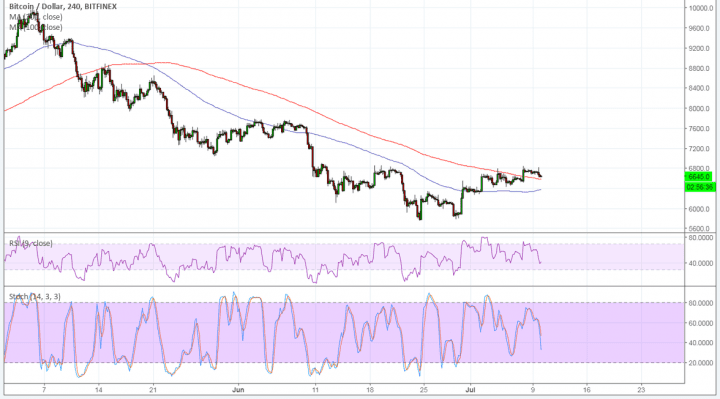 Bitcoin suffered some blows after three well-know American economists (Roubini, Stiglitz, and Rogoff) spoke negatively about cryptocurrency and how government regulation could bring its value down. Roubini also mentioned that the volatile nature of bitcoin price also prevents it from being a reliable store of value.

Nonetheless, investors still remain optimistic that the cryptocurrency industry could sustain a rebound from previous declines. After all, the mood was pretty positive for the most part of the previous week, which marked a strong start for the quarter and second half of the year.

The dollar remains vulnerable to market sentiment, particularly when it comes to trade troubles between the U.S. and China. For now, though, this appears to have taken the backseat as the spotlight is on the political drama in the U.K. related to Brexit.