Bitcoin broke below a short-term ascending channel to signal that bears have the upper hand once more. Price could make its way to the next support area at $5,800 from here, but a pullback might still be possible.

Applying the Fibonacci retracement tool on the latest swing high and low shows that the 61.8% level is closest to the broken support around $6,600 while the 50% level lines up with the 100 SMA dynamic resistance.

This short-term moving average is below the longer-term 200 SMA to indicate that the path of least resistance is to the downside. In other words, the selloff is more likely to resume than to reverse. A shallow pullback could find a ceiling at the 38.2% Fib or short-term area of interest around $6,350.

RSI is still pointing up to show that there’s some bullish momentum left before it reaches overbought levels. Stochastic is also heading north but already approaching overbought levels. Turning lower could bring bears back in and lead to a break below the swing low at $6,079. 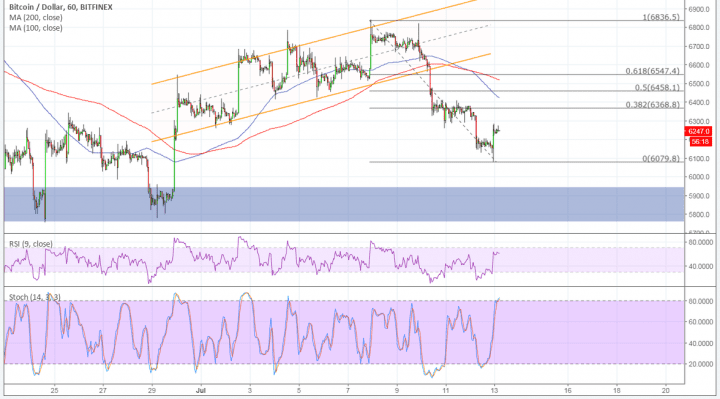 Bitcoin was unable to hold on to most of its gains from the previous week as another round of negative headlines popped up. First up, there were doomsday predictions from well-known economists who cited how bitcoin anonymity and volatility could bring its downfall. Next, there was the hack on Bancor that led to more than $13 million in cryptocurrency affected.

With that, many investors were quick to liquidate their holdings on the earlier bounce, fearing that bitcoin could dip back to support or even break below it. It didn’t help that the return in risk-taking drew traders to the stocks and commodities markets which offered strong gains despite persistent trade troubles.

Besides, the dollar was also able to stand its ground on stronger inflation expectations and hawkish remarks from policymakers.