Bitcoin recently broke out of its ascending triangle pattern to signal that an uptrend is underway. However, price is hitting pretty strong resistance at the $7,600 level so a pullback could be needed before the climb resumes.

Applying the Fibonacci retracement tool on the latest rally shows that the 50% level lines up with the broken resistance, which might now hold as support. A larger pullback could last until the bottom of the triangle near the 61.8% Fibonacci retracement level and moving averages’ dynamic inflection points.

The 100 SMA recently crossed above the longer-term 200 SMA to confirm that the path of least resistance is to the upside. This means that the uptrend is more likely to continue than to reverse.

However, RSI is already indicating overbought conditions and starting to turn lower to signal a return in bearish pressure. Stochastic is also pointing down to show that sellers are ready to return and push bitcoin back down. 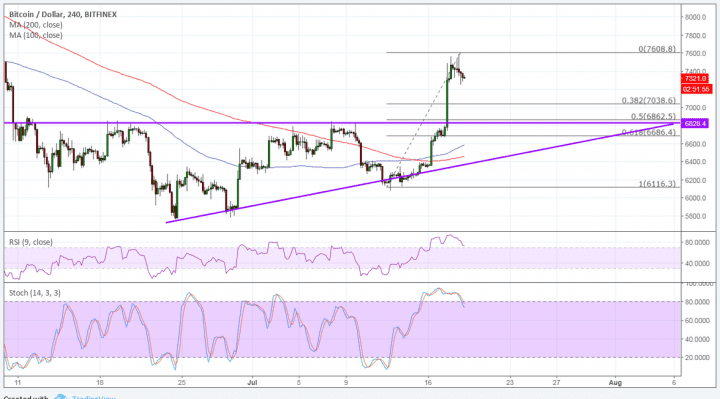 Recent developments in the industry have been mostly positive, including the regulatory efforts being made in Japan and South Korea. Earlier in the week, it was confirmed that BlackRock, the world’s largest fund manager, has formed a team to look into investment opportunities in the cryptocurrency industry.

Although its CEO clarified that they’re not seeing strong investor demand yet, this revived optimism in the industry as more developments and liquidity could be expected from this pickup in institutional interest. The strong rallies were also sustained by FOMO (fear of missing out) among market participants as bulls didn’t want to get left behind on the bounce.

Meanwhile, the dollar has returned some gains to its peers when Fed Chairperson Powell expressed some concerns about low inflation. Most of his remarks were still optimistic, enough to keep risk-taking in play. Another set of positive reports for the cryptocurrency industry could inspire another leg higher.