Bitcoin appears to be gaining more bullish traction as it attempts to break past a flag pattern and the top of its ascending channel. If that continues, a steeper climb could ensue.

Note that a flag pattern is often considered a continuation signal and confirmation could be followed by a move that’s the same height as the mast. In this case, the mast spans $6,200 to $7,500 so the resulting climb could be $1,300 tall.

The 100 SMA is still above the longer-term 200 SMA to confirm that the path of least resistance is to the upside. In other words, the uptrend is more likely to resume than to reverse.

However, RSI is treading lower from overbought levels to signal a return in selling pressure. This could still lead to a pullback to the channel support or even halfway through at the area of interest at the $7,000 major psychological mark.

Stochastic is on the move higher, though, so bullish momentum is present. A move past the $7,700 could mean stronger confirmation of an upside break from the flag and a boost in buying pressure. 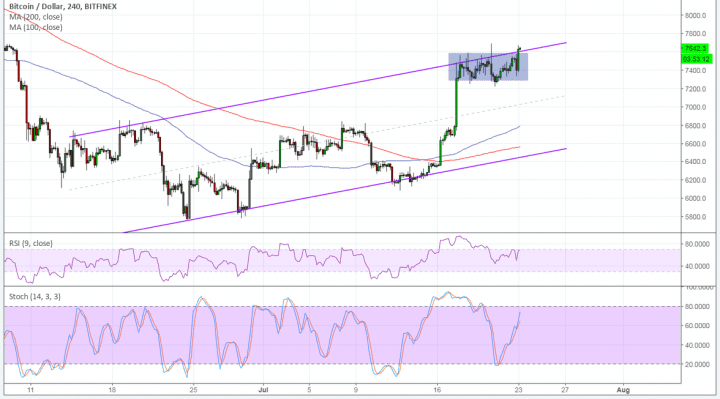 Bitcoin has been on stronger footing for the past week thanks to headlines on institutions looking to make investments in the cryptocurrency space. This also partly allowed traders to welcome regulatory updates on a more positive note instead of taking it as opportunities to jump out.

Looking ahead, the current week could be another test of sentiment in the industry. Recall that bitcoin and its peers were off to a really strong start in the second quarter only to see some gains returned the following week when top economists had some negative remarks. The gains were revived soon after on news of BlackRock forming a team to look into opportunities in cryptocurrencies and blockchain.