Bitcoin appears to be hitting resistance at the descending trend line visible on its daily time frame and may resume the slide to these downside targets. The Fibonacci extension tool on the latest pullback shows the nearby support zones.

The 100 SMA is below the longer-term 200 SMA on this time frame to confirm that the path of least resistance is to the downside. This confirms that the selloff is more likely to resume than to reverse. Then again, the gap between the two is narrowing to reflect weaker selling pressure. An upward crossover could draw more buyers in and lead to a break of the trend line and $8,500 highs.

RSI is pointing down, though, which means that sellers have the upper hand. The oscillator has plenty of room to slide before indicating oversold conditions, so bearish pressure could stay in play for much longer. Stochastic has also reached overbought levels and is pointing down to signal a return in selling momentum soon. 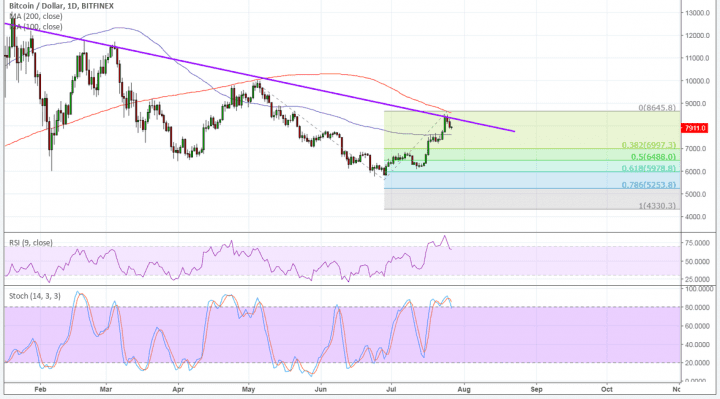 Bitcoin might be running out of steam on its climb as there have been no catalysts to push it higher this week. Last week was driven mostly by institutional interest but the SEC decision on the bitcoin ETF applications did not fall through.

Instead the regulator announced a delay on its decision for some applications while denying again the bitcoin ETF application of the Winklevoss twins. Meanwhile, CME CEO Duffy noted that they are not looking to introduce altcoin futures anytime soon and are not seeing substantial interest in bitcoin futures. Profit-taking leading up to the expiry of these contracts this July 27 is also being blamed for the slowdown in the rally.