Bitcoin is currently trading inside a short-term rising channel, but if the previous ones are any indication, this could still be followed by a downside move.

The 100 SMA is below the longer-term 200 SMA to indicate that the path of least resistance is to the downside or that the selloff is more likely to resume than to reverse. Price also hit resistance at the 200 SMA dynamic inflection point and looks ready for a dip back to the channel bottom.

A candle closing below this area could be enough to confirm that the longer-term downtrend is resuming and that new lows could be reached. RSI is still pointing down to indicate that sellers have the upper hand while stochastic is also moving south, so bitcoin could follow suit.

On the other hand, a break past the 200 SMA and channel top around $6,800 could signal that an uptrend is in the cards. Take note how bitcoin has formed new lows at a slower pace compared to earlier ones, so bearish pressure might slowly be fading. 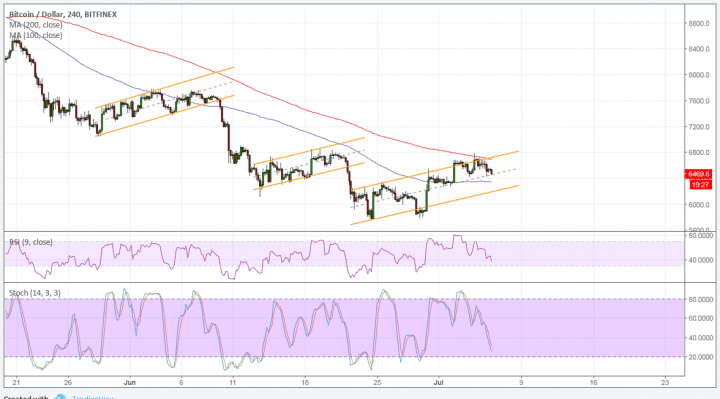 Bitcoin and its peers were off to a solid start for the quarter and could cap off this week on a strongly positive note. In that case, more investors could revive their interest and trust in cryptocurrencies, thereby reestablishing their long positions in the coming weeks.

It also helps that there have been no negative reports pertaining to stricter regulation, exchange shutdowns, or hacking incidents so far. If this sentiment keeps up, altcoins could even hold on to their gains and go for more in the next few months, possibly even until the end of the year.

Meanwhile, the dollar has the NFP release to contend with. Expectations for a lower read are in play, likely dampening Fed rate hike hopes as highlighted by the FOMC minutes also released this week. However, this could also mean room for an upside surprise that could lead to a strong dollar boost.