Bitcoin recently broke past a short-term descending trend line to signal that a reversal from the downtrend is in order. However, price has yet to break past several resistance levels to confirm an uptrend.

Also, the 100 SMA is still below the longer-term 200 SMA to suggest that the path of least resistance is to the downside. In other words, there’s still a chance for the downtrend to resume. Price is also currently testing the 100 SMA dynamic inflection point and holding as resistance could send it back down to the swing low.

A larger correction could still last until the 61.8% Fibonacci retracement level near the $8000 major psychological mark. This also lines up with a former support zone, which might now hold as resistance close to the 200 SMA dynamic inflection point.

RSI is approaching overbought levels to reflect exhaustion among buyers but looks ready to turn lower without doing so. Stochastic is already indicating overbought conditions and might turn lower to draw sellers back in. In that case, a move back to the $7000 swing low could take place. 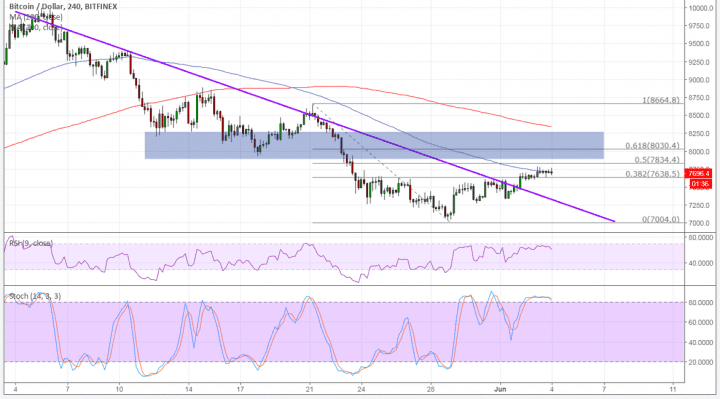 Bitcoin has been able to gain some traction on its bounce as risk appetite improved towards the end of the month. The rebound was also attributed to profit-taking since bitcoin has been sliding for the most part of May.

Then again, there have been a few positive developments across the industry, even in other digital assets. This has renewed investor interest in the industry and could pave the way for a more optimistic start to June.

Meanwhile, the dollar has been on the back foot, owing mostly to trade war concerns. This has drawn traders to alternative assets like cryptocurrencies once more, preventing the US currency from taking advantage of stronger than expected jobs data. There are no US reports lined up this week so sentiment could keep pushing bitcoin price around.