Bitcoin recently broke above a descending trend line to signal a reversal from the selloff and has since completed its retest of the broken resistance. Price is also forming a short-term ascending channel to signal that bulls are gaining traction.

However, the 100 SMA is still below the longer-term 200 SMA to suggest that the path of least resistance is to the upside. This indicates that the downtrend still has a chance at resuming, especially if price breaks below the short-term channel bottom. Price has broken past the 100 SMA dynamic inflection point, though, indicating that bullish pressure could kick in.

If it continues to hold, on the other hand, bitcoin could make its way to the Fib extension levels next. The 50% extension is located near the latest swing high and might contain limit orders. Stronger bullish momentum could take it up to the channel resistance around $7,800 and the 61.8% extension. The full extension is located at the $8,180 level near the 200 SMA dynamic resistance.

RSI continues to move up, also confirming that buyers are in control. Stochastic is also heading north so bitcoin might follow suit, but the oscillator is approaching overbought levels to signal exhaustion. Turning lower could bring sellers back in and lead to a move back to the next support zones. 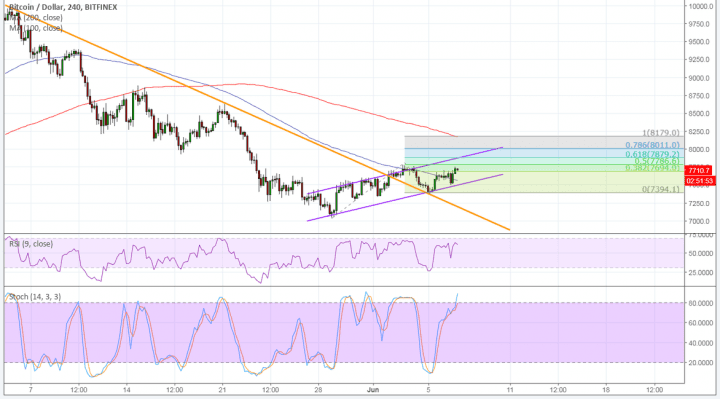 Bitcoin has drawn some support from the SEC announcement that it’s not looking to have ICOs registered because those are not securities. This eased some regulatory fears about cryptocurrencies, paving the way for a brief bounce.

Whether this can be sustained is still a question, though. For now, bitcoin also seems to be drawing support from risk-taking and dollar weakness. Trade war fears continue to dampen demand for the dollar, preventing it from rallying on upbeat economic data released over the past few days.