Bitcoin appears to be forming yet another downtrend signal in the form of a complex head and shoulders pattern. Price is testing the neckline and a break lower could lead to a selloff of the same height as the formation, which spans $8,400 to $10,000.

The 100 SMA is crossing below the longer-term 200 SMA on the 4-hour time frame to confirm that the path of least resistance is to the downside. In other words, bearish pressure is about to pickup from here and the neckline is likely to break. In addition, these moving averages also seem to have held as dynamic resistance.

RSI is on the move down so bitcoin could follow suit while sellers are in control. Stochastic is also heading south to signal that bears are on top of their game. Both oscillators are nearing oversold levels, though, so a bounce may still be in order. 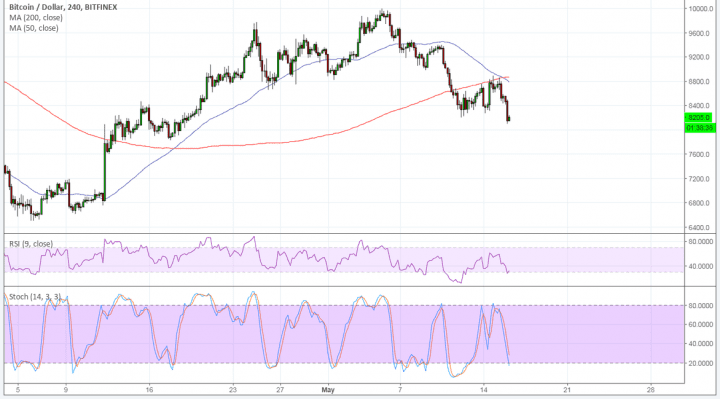 The lack of positive updates from the bitcoin industry has led to further liquidation of positions, coming from the rejection of the $10,000 mark and negative remarks from Warren Buffet. Granted there have been some minor developments, it looks like investors are hoping to hear more before reviving their long bets.

In contrast, the dollar has been on a tear thanks to stronger tightening expectations. Even though the April US retail sales disappointed, traders paid closer attention to the higher price components and the positive revisions to the March report. Bond yields surged and lifted the US currency in the process.

Looking ahead, there are no major reports due from the US economy next, so it could be all about market sentiment from here. There are also no major events in the bitcoin arena, although it’s hard to predict what companies or big investors might announce. In any case, there were still some positive developments in the previous weeks that could support institutional funds flowing into bitcoin.