Bitcoin is still trending lower, moving inside a descending channel on its 1-hour chart and ready to test support. A bounce could spur a pullback to the channel resistance which is spanned by Fibonacci retracement levels.

Speaking of moving averages, the 100 SMA is below the longer-term 200 SMA to signal that the path of least resistance is to the downside. Price also found resistance at the 100 SMA dynamic inflection point recently.

A shallow pullback could hit a ceiling at the 38.2% Fib or $8300 level then head back down to the swing low or the channel bottom. However, RSI is pulling up to signal that buyers could try to regain the upper hand, likely spurring a bounce from here.

Similarly, stochastic is climbing out of the oversold region to signal a return in buying pressure as well. A bullish divergence can also be seen as the oscillator made higher lows while price had lower lows. 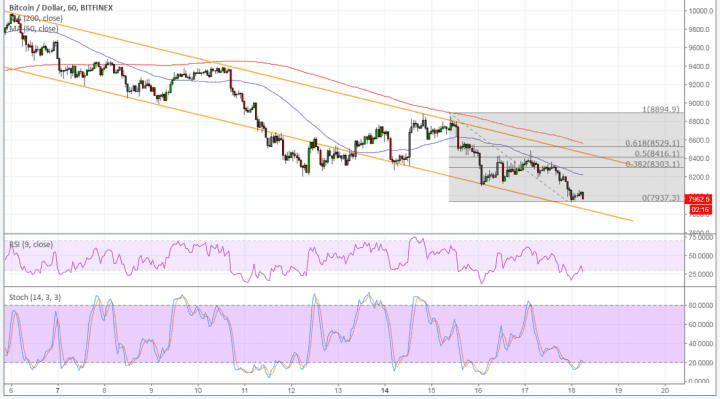 Whether this leads to a correction or a stronger bounce remains to be seen as traders are still waiting to hear more positive industry updates to sustain the rally. Bitcoin price has been particularly sensitive to headlines, along with market sentiment these days.

For now, the main focus has been the UPbit investigation as this has revived fears of regulation and put the legitimacy of ICOs into question. Any shutdown or penalties could dampen trading activity, even on other exchanges that may be tagged for inspection as well.

Meanwhile, the dollar holds on to its gains while traders expect another Fed rate hike in June. Bulls could simply be positioning ahead of the actual announcement before booking profits later on.