Bitcoin made a strong bounce off support but seems to be encountering resistance at the top of its descending channel. If this holds, price could head back to the swing low, channel support, or Fib extension levels.

The 100 SMA is below the longer-term 200 SMA to confirm that the path of least resistance is to the downside. In other words, the selloff is more likely to resume than to reverse. The gap between the moving averages is also widening to reflect stronger selling momentum and the 100 SMA dynamic resistance lines up with the channel top.

RSI is still moving up, though, so there may be some buying pressure left. In that case, a move past the $7,600 level could open the path for a test of $8,000 or even the 200 SMA dynamic inflection point at $8,700. Stochastic, however, is already indicating overbought conditions and may turn back down soon. 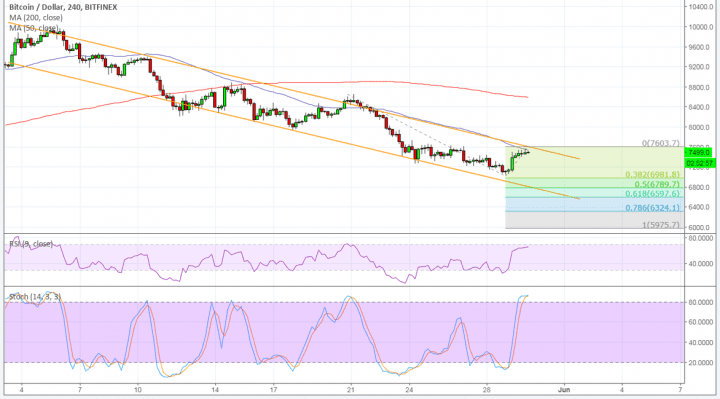 Analysts say that the recent bounce in bitcoin may have been spurred by resurfacing fears of a euro zone breakup that could threaten the existence of the euro. Although this may be a tad far-fetched for now, it’s worth noting that bitcoin has been able to previously gain off these types of scenarios.

Italy could be headed for another round of polls soon as the coalition government leaders are unable to draw support from opposing parties. If elections are needed again, this could serve as a proxy for an EU membership referendum, which many fear would revive anti-EU sentiment.

Meanwhile, the dollar faces the NFP release later this week and leading indicators are due within the day. Odds of a rate hike would likely be influenced by the average hourly earnings figure, too.