Bitcoin has formed higher lows and higher highs in its short-term uptrend visible on the 1-hour time frame. Price just bounced off the resistance and is pulling back to the mid-channel area of interest, which seems to be holding as support.

This area also lines up with the 38.2% Fibonacci retracement level near the $6,500 mark where buyers might be waiting. A larger correction could still last until the 50% Fib that coincides with the 100 SMA dynamic inflection point and channel bottom or the 61.8% Fib and 200 SMA.

The 100 SMA is above the longer-term 200 SMA to confirm that the path of least resistance is to the upside. In other words, the uptrend is more likely to resume than to reverse. Stochastic already seems to be turning higher without reaching oversold levels, which suggests that buyers are eager to return. RSI, on the other hand, still seems intent on moving south and has plenty of ground to cover before indicating bearish exhaustion. 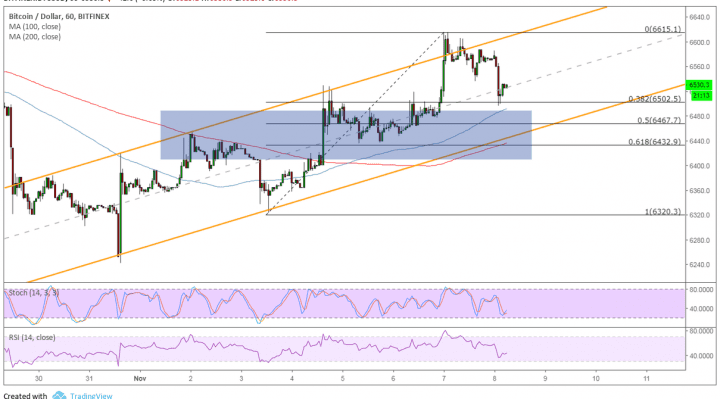 Bitcoin has had a good run for the past few days, so it’s understandable that investors are booking profits at key levels. This could spur corrections to cheaper levels where more buyers might be waiting to join in to sustain the ongoing climb.

Apart from being buoyed higher by the bullish outlook shared in Morgan Stanley’s latest report, bitcoin is also drawing support from Overstock CEO Byrne’s remarks on how the digital asset can be used in failing financial systems. He cited:

“People turn to it where they collapse, like Venezuela or Cyprus or Syria, something like that. When people start getting into it is when their own financial systems collapse. So yes, given that I think the entire modern financial system is a big Keynesian, magic money tree Ponzi scheme, I do expect that the day will come when people turn to crypto.”