Bitcoin is currently stuck inside its triangle pattern on the 4-hour time frame as it forms higher lows and lower highs. A breakout could be imminent, though, as price is nearing the peak of the formation.

The 100 SMA is below the longer-term 200 SMA on this chart, hinting that the path of least resistance is to the downside or that a move lower is more likely to happen than an upside break. Stochastic is also pointing down to signal the return of selling pressure while RSI appears to be treading lower as well.

A move below the $6,400 level could be enough to confirm that bearish pressure has won over and that further declines are in the cards. To be specific, bitcoin might fall by the same height as the triangle pattern, which spans $5,800 to around $9,800. 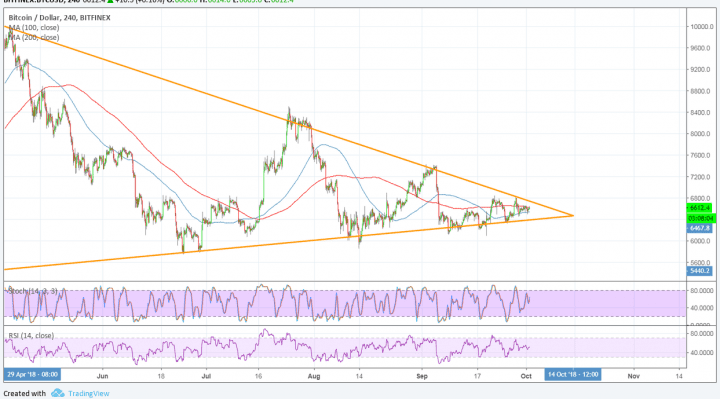 Then again, the fundamental picture has been a bit better for bitcoin recently, even as the SEC simply decided to postpone its ruling on bitcoin ETF applications. The looming launch of ICE Bakkt bitcoin futures could bring an influx of funds, both from retail and institutional investors, and any technical breaks could spur FOMO among buyers.

The reversal of Google’s ban on bitcoin and ICO ads is also happening this month, likely reviving interest from the general public. Although the search engine will only be approving ads from regulated entities targeting audiences in the US and Japan, it also represents a thumbs-up in terms of efforts to protect consumers from fraud.

Fundstrat’s Tom Lee predicts that a strong rebound before the end of the year is still a possibility, and reviewing past price action suggests that it’s not too late for a big rally. Of course it would also help to have a catalyst supporting this move so as to not be vulnerable to short positioning.