Bitcoin has broken above its short-term symmetrical triangle but is still stuck inside the larger one visible on longer-term time frames. Price is testing the resistance, though, and may also be attempting to break out of this one.

In that case, bitcoin could be in for a climb that’s approximately the same height as the triangle formation. Similarly, a break below support could lead to a drop of the same size. However, the 100 SMA is above the longer-term 200 SMA to signal that the path of least resistance is to the upside or that a break higher is more likely to happen than a breakdown.

Stochastic has some room to head higher before reflecting overbought conditions and signaling profit-taking among buyers. Doing so could take bitcoin back to the triangle support before bulls could defend the floor again. RSI hasn’t quite reached overbought levels just yet but looks ready to move south so bitcoin might follow suit. 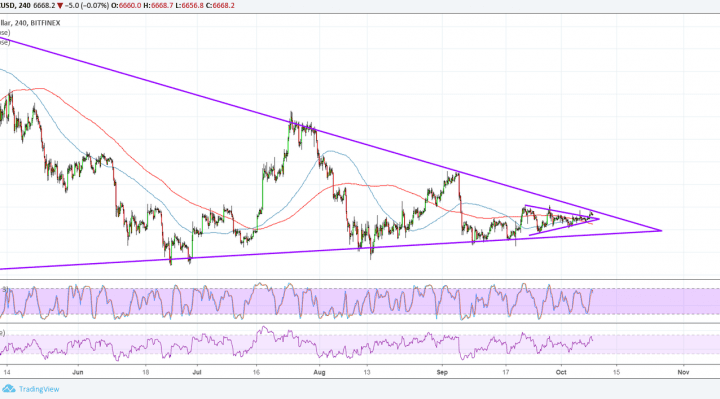 There are a good number of factors supporting bitcoin at the moment, including the presence of risk aversion in broader financial markets. It appears that this sentiment is currently drawing traders out of traditional markets like stocks and commodities while still pursuing higher returns in alternative assets like cryptocurrencies.

There is some uncertainty tied to the pending bitcoin ETF applications with the SEC as rejection could put the industry a step back in terms of attracting institutional funds. On the other hand, approval could bring strong gains as this might be seen as the main catalyst for a strong rally before the end of the year.

More analysts are saying that bitcoin has already bottomed out, but the recent report that the oldest bitcoin exchange in London is looking into cutting staff levels is worrisome for the industry outlook. Nonetheless, the WTO report confirmed that cryptocurrencies like bitcoin are poised to disrupt several industries in the future.