Bitcoin recently busted through its ascending channel to signal that a reversal from the uptrend is happening. Price might need a quick pullback to gather more selling pressure, though.

Applying the Fibonacci retracement tool on the latest swing high and low shows that the 61.8% level is closest to the broken support but the other Fib levels are in line with moving averages to add dynamic resistance.

In particular, the 38.2% Fib is in line with the 200 SMA at $6,270 and the 100 SMA lines up with the 50% level at $6,856. The 100 SMA is above the 200 SMA to indicate that the path of least resistance is to the upside or that there’s still a strong chance for the uptrend to resume. However, price has slumped below these dynamic inflection points to signal selling pressure.

RSI has made it to oversold levels to reflect exhaustion among sellers. The oscillator is starting to pull up, suggesting that buying pressure could return from here. Stochastic is also in the oversold region and is slowly turning higher to signal a return in bullish momentum. If any of the Fibs keep gains in check, bitcoin could revisit the swing low or break below it. 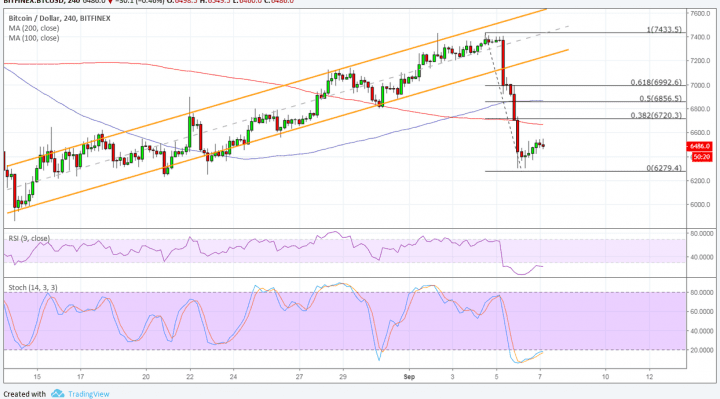 Bitcoin is back below the levels it kicked the month off as the selloff has been sharper than the climb. The earlier uptrend drew support from positive expectations that the SEC could someday approve bitcoin ETF proposals, but sentiment has been less upbeat recently.

Perhaps this turnaround has been spurred by rumors that Goldman Sachs would ditch its plans to create a bitcoin trading desk, dampening hopes for more institutional flows. Execs also reportedly said that there are still a lot of steps to be taken, most of which are out of their control, before a regulated bank can offer cryptocurrencies to clients.