Bitcoin is still inside its descending channel but is testing the resistance. A break past this upside barrier could also be indicative of a continuation of the longer-term uptrend.

Price is currently sitting right on the daily ascending trend line around $8,000. The area of interest at $9,000-10,000 has been pretty strong, though, so it might take a significant pickup in volume to sustain a move higher.

The 100 SMA is above the longer-term 200 SMA to confirm that the path of least resistance is to the upside. This confirms that the longer-term climb is more likely to resume at some point than to reverse. The 200 SMA is also holding as dynamic support as well, but a break below this could open the dam for more bearish pressure.

Stochastic is still on the move up to confirm that buyers are on top of the game. RSI is also pulling higher after a dip close to the oversold region, drawing more buyers to the mix. The gap between the moving averages is sufficiently wide to show that bullish momentum is present. 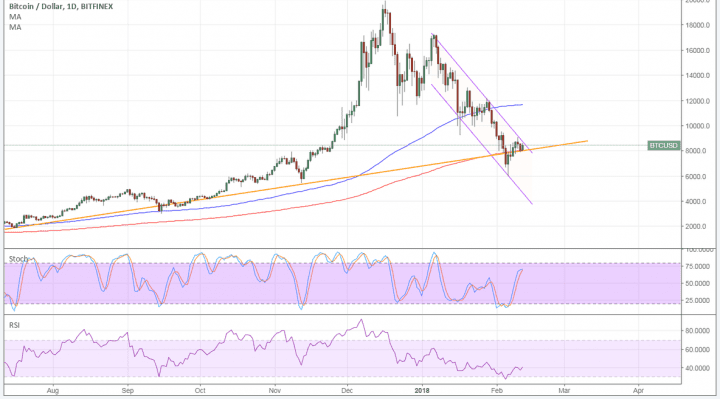 Risk appetite appears to be returning to the financial markets after last week’s sharp declines. Note that bitcoin has been moving in tandem with the likes of stocks and commodities, as opposed to its previous behavior of taking advantage of safe-haven flows.

This signals that investor sentiment could make or break bitcoin’s rallies as the cryptocurrency has been hard-pressed to find bullish catalysts. So far, the Senate hearing on allowing regulation to make room for industry developments has been positive news and could be taken as precedent by other nations seeking to oversee the cryptocurrency sector as well.

There are no major catalysts from the US this week, so it could be all about stock market performance. Note, however, that global tightening jitters have been negative for risk as this could dampen investment and business activity down the line.