Bitcoin seems prime for a strong rally as an inverse head and shoulders chart pattern can be seen on its 1-hour time frame. Price is already testing the neckline of the chart pattern and an upside break could send it higher by $2,000 or the same height as the chart formation.

The 100 SMA has crossed above the longer-term 200 SMA to signal that the path of least resistance is to the upside. This suggests that a reversal from the earlier selloff is underway. Price has also moved above the 100 SMA so it could now hold as dynamic support.

Stochastic is still heading lower, though, so bitcoin could pull back before heading north. However, the oscillator is nearing oversold levels to show exhaustion among bears and a potential return in buying pressure.

RSI has more room to fall so bitcoin might follow suit and retest the support around $8,000 before gaining more upside traction. A move below the 200 SMA, however, could mean that sellers are still in control. 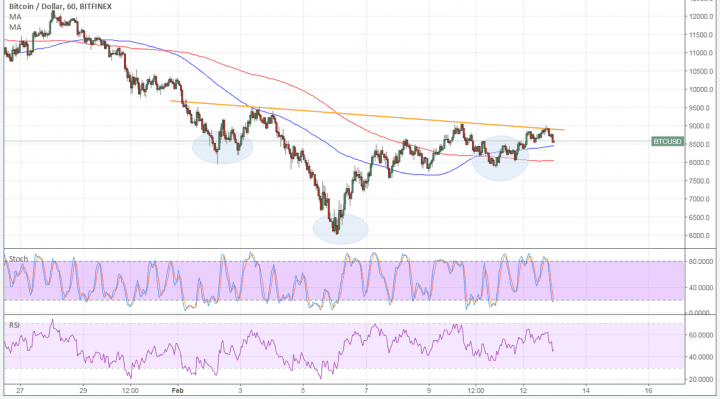 Risk appetite was present in the financial markets these days as stocks and commodities are slowly recovering from the previous week’s selloff. Note that bitcoin has trailed these higher-yielding riskier assets as opposed to acting as a safe-haven in the past.

Analysts say that easing concerns about regulation are to thank for the pickup in bitcoin. After all the jitters from the crackdown in South Korea earlier on, the attention is now shifting to how the recent Senate hearing in the US encouraged regulators to keep the door open for industry developments instead of hampering them.

Other nations could follow suit and take a similar stance on cryptocurrencies. There are global summits scheduled to take place in the next few days and bitcoin is likely to be one of the topics for discussion.