Bitcoin price has shown enough bullish momentum for a move up to its descending channel resistance. This is an area of interest that lines up with the 200 SMA dynamic inflection point and a former support around the $10,000 major psychological mark.

The 100 SMA is still below the longer-term 200 SMA so the path of least resistance is to the downside. This means that resistance is more likely to hold than to break. In that case, price could still head back down to support around $5,000 or the swing low near $6,000.

However, bitcoin has also moved past the 100 SMA dynamic inflection point to indicate a bit of upside momentum. A move past the 200 SMA could lead to a rally up to the next area of interest at $12,000.

Stochastic is indicating overbought conditions, though, so profit-taking could ensue and lead to a pullback to the middle of the channel. RSI is also nearing overbought territory to reflect exhaustion among buyers, possibly allowing sellers to regain the upper hand. 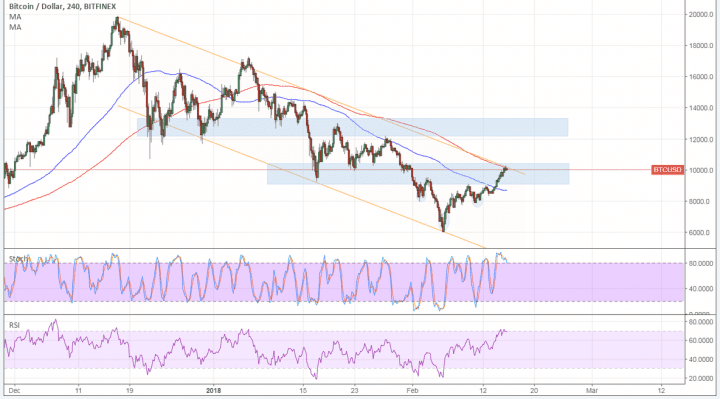 Bitcoin has been propped up by easing fears about regulation. This improved sentiment came from the US Senate hearing and remarks from CFTC and SEC heads citing that they’re keeping the industry open for development even with regulation in place. South Korea appears to be taking a similar stance as indicated by comments from officials over the weekend.

At the same time, risk appetite has extended its stay in the financial markets, to the benefit of stocks, commodities, and cryptocurrencies. Traders are also dumping the US dollar despite mostly upbeat data, as there are concerns about the fiscal situation and global tightening prospects.

The move towards $10,000 also represents a strong bullish streak that might be enough to draw investors back in bitcoin. Sustained gains to the $12,000 level could attract more buying interest and a surge in volumes could keep the uptrend going.