Bitcoin recently broke out of its descending channel to show that a longer-term climb is underway. Price is now trading above a short-term ascending trend line and might be due for a bounce off the broken resistance. This also lines up with the 200 SMA dynamic inflection point.

The 100 SMA is still below the longer-term 200 SMA, though, so the path of least resistance is to the downside. This suggests that the selloff could resume rather than reverse. However, the moving averages seem to be gearing up for an upward crossover. In that case, more buyers could return.

Stochastic is still on the move down to show that sellers have the upper hand while buyers take a break from the recent climb. RSI is also turning lower and has more room to fall, possibly taking bitcoin for a test of the nearby support areas. 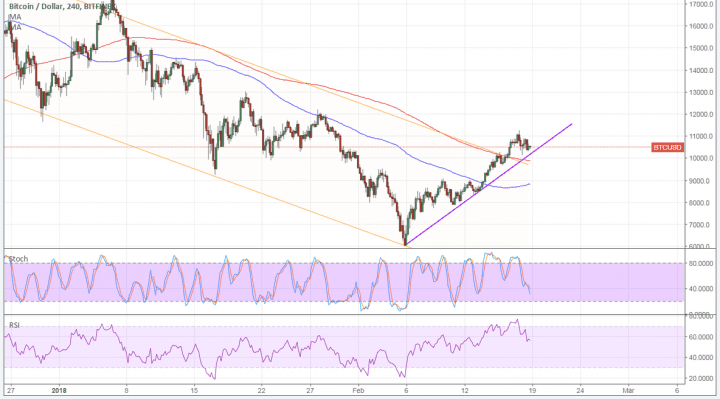 Sentiment for bitcoin and other cryptocurrencies have turned positive last week after South Korea expressed its intention to implement something like BitLicense. This implies that they are taking their cue from the US Senate Hearing encouraging regulation without hampering development in the industry.

Besides, dollar weakness has been in play for a while and could be set to resume this week. US banks are closed for the holiday, though, so liquidity could be thin early on. The FOMC minutes are due later in the week and tightening expectations could make or break the dollar’s trends.

Apart from that, a continuation of risk-on flows from the previous week could also prove bullish for bitcoin, which has been trailing assets like stocks and commodities lately. More headlines supporting developments in the industry and less on crackdowns and bans could also encourage investors to put money back in bitcoin.