Bitcoin has broken below the short-term symmetrical triangle pattern to confirm that further losses are in the cards. Price is now trading below the mid-channel area of interest and setting its sights on the channel support around $7,000.

The 100 SMA is below the longer-term 200 SMA to confirm that the path of least resistance is to the downside. This means that the downtrend is more likely to continue than to reverse. The gap between the moving averages is also widening to indicate a pickup in selling pressure.

Also, the 100 SMA lines up with the broken triangle support to add to its strength as resistance in the event of a quick pullback. A larger pullback to the channel resistance around $12,000 could also encounter a roadblock at the 200 SMA dynamic inflection point. 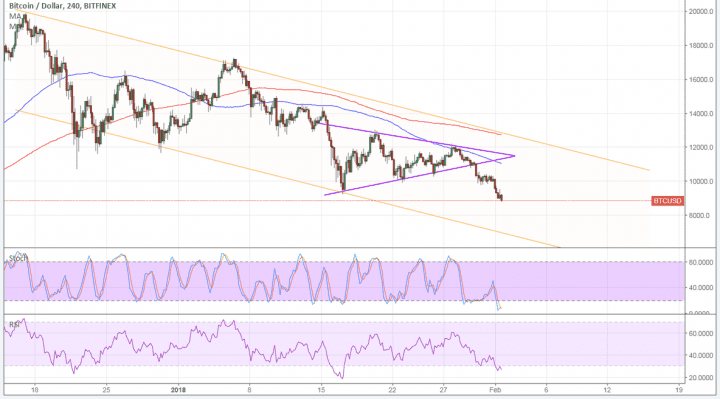 However, bitcoin can’t quite seem to catch a break as fears of more crackdowns are weighing on price. The CFTC recently announced their plans to be more strict about bitcoin futures, with Chairman Giancarlo stating:

This could mean requirements for Designated Market Contracts to “exchange large trader reporting thresholds at five bitcoins or less” and “information sharing agreements with spot market platforms to allow access to trade and trader data”.