Bitcoin has been trending higher but is consolidating inside a rising wedge pattern on its 4-hour and 1-hour charts. Price is currently testing the wedge resistance and could be due for another move back to support.

Technical indicators are giving mixed signals, though. The 100 SMA is safely above the longer-term 200 SMA to signal that the path of least resistance is to the upside or that the rally is more likely to continue than to reverse. The gap is also widening to reflect strengthening bullish momentum.

Stochastic is moving higher and is dipping into overbought territory while RSI has some room to climb. Once both oscillators turn lower from overbought levels, selling pressure could pick up and lead to a break below the wedge support. The nearby moving averages could still hold as dynamic support levels.

Note that the wedge spans $6,000 to $11,500 so the resulting break in either direction could last by the same height. 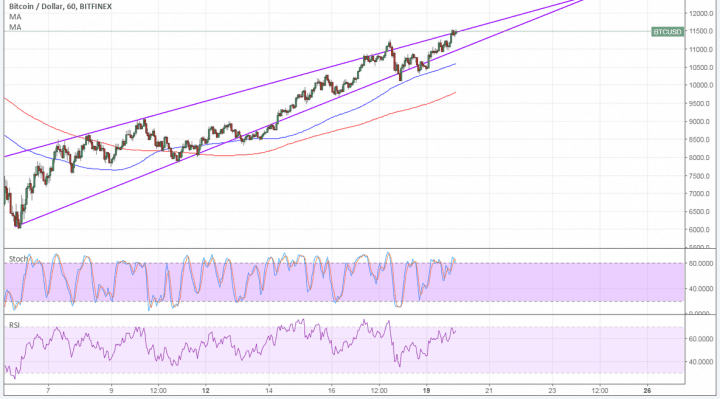 Traders have been more positive for bitcoin as it recovered from the drop to the $6,000 levels earlier in the month. At the same time, sentiment has improved after the US Senate hearing encouraged developments in the industry even in a regulatory backdrop. South Korean officials appeared more welcoming about cryptocurrency activity over the weekend when an official even suggested that they could adopt something like BitLicense.

As for the dollar, demand has ticked higher on Monday but this may be a bit of profit-taking after the slide in the previous week. US markets will reopen today and another strong performance by equities and commodities could dampen demand for the safe-haven currency. Also note that bitcoin has been trailing the performance of riskier assets.

One risk factor could be the release of the FOMC minutes, which might revive dollar gains on stronger tightening hopes. This also weighs on risk appetite in financial markets, possibly causing bitcoin price to dip again.