Bitcoin recently broke out of a descending trend line resistance, signaling that a reversal is underway. Price has hesitated upon hitting the next major area of interest at the $12,000 level so a pullback is taking place.

The 100 SMA is below the longer-term 200 SMA to show that bearish momentum is present. However, the gap between the moving averages is narrowing to indicate that an upward crossover is imminent. In that case, the reversal could gain traction and bitcoin could revisit the swing high close to the $12,000 barrier.

Stochastic is on the move down but is dipping into oversold territory to show that buying pressure might return soon. RSI has room to fall so price could make a deeper correction to the next Fib levels closer to $8,000. 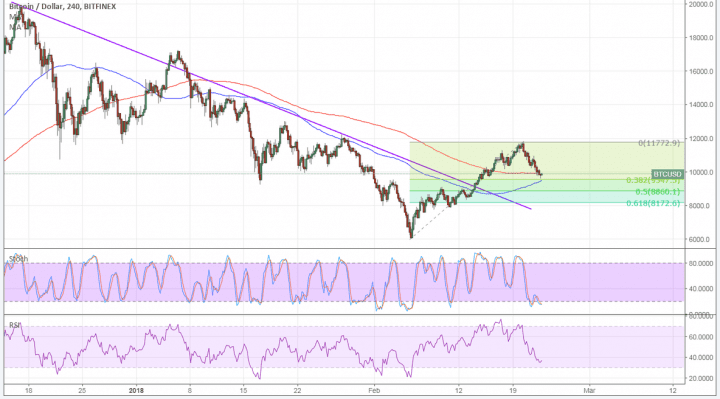 The US dollar lost ground to most of its counterparts but bitcoin failed to benefit from this as the cryptocurrency was bogged down by resurfacing regulatory concerns. As it turned out, the SEC charged former cryptocurrency exchange BitFunder and its founder with fraud. The statement alleges that founder Jon E. Montroll ran the operation as an “unregistered securities exchange” and defrauded users of that exchange.

This revived concerns about the regulatory environment, erasing some of the positive sentiment spurred by the US Senate hearing encouraging developments in the cryptocurrency industry. Traders appear wary that other nations, particularly South Korea, could step up their efforts in cracking down similar exchanges, which could lead to more liquidation in the next few days.

Also keep in mind that the dollar is drawing support from renewed tightening expectations from the Fed as majority of policymakers acknowledged improvements in the economy in the latest FOMC minutes.