Bitcoin looks ready to resume its climb as price is finding support at the area of interest and technical indicators are suggesting a bounce. Applying the Fibonacci extension tool shows that the next resistance level is at the 38.2% level or $11,530 then the 50% extension is closer to the $12,000 area of interest.

The 100 SMA is crossing above the longer-term 200 SMA to confirm that the path of least resistance is to the upside. This signals that the uptrend is more likely to resume from here. These moving averages appear to be holding as dynamic inflection points as well.

Stochastic is already on the move up to show that buyers are taking control of price action. However, RSI seems to have room to fall so the correction or consolidation could continue for a while. 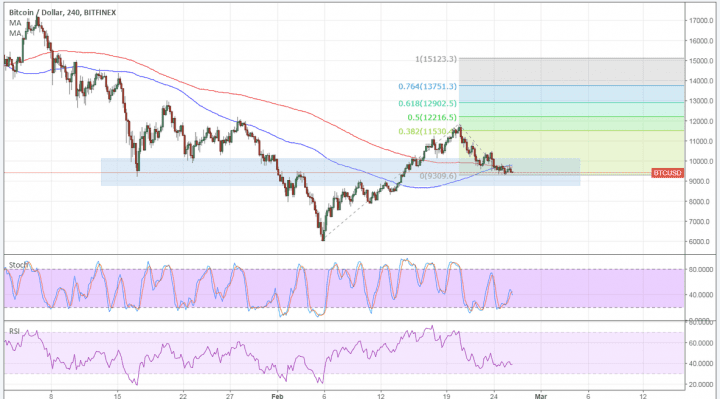 Dollar demand has been sustained for the most part of the previous week, which is probably why bitcoin gave back a huge chunk of its recent gains. Apart from that, the positive sentiment stemming from the US Senate hearing encouraging cryptocurrency developments appears to have faded. After all, the SEC apprehended the founder of a bitcoin exchange for allegedly defrauding clients, so investors are on edge once more.

Hawkish FOMC minutes and a degree of risk aversion also lifted the safe-haven dollar. There’s not much in the way of market catalysts from the US this week, though, so this could be a make or break point for BTCUSD depending on market sentiment.

A continuation of risk-off flows could keep propping the dollar higher across the board and dragging bitcoin down in the process. On the flip side, a return in risk-taking could be positive for higher-yielding assets including bitcoin.