Bitcoin has formed lower highs and higher lows, creating a symmetrical triangle chart pattern on its 4-hour time frame. Price is testing the resistance and could be due for a move back to support soon.

However, the 100 SMA has just crossed above the longer-term 200 SMA to signal that the path of least resistance is to the upside. This suggests that an upside breakout is possible. Note that the chart pattern spans $6,000 to $13,000 so the resulting rally could be of the same height.

Stochastic is indicating overbought conditions and looks ready to turn lower, signaling that sellers could have the upper hand from here. RSI has some room to climb but is nearing overbought territory as well. Still, the moving averages near the triangle bottom could provide an extra layer of support. 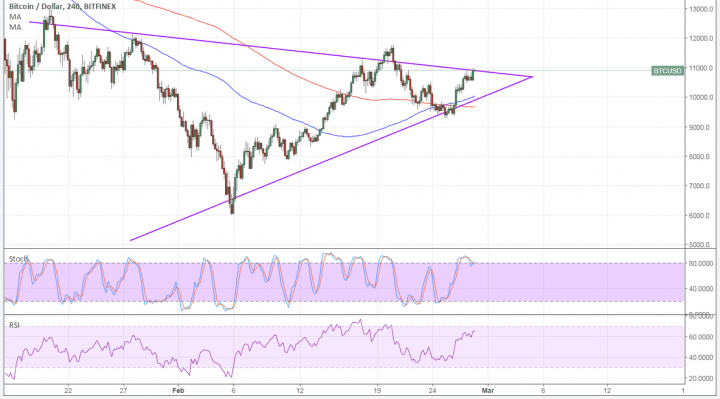 Dollar demand has kicked higher in the latest New York session when new Fed Chairperson Powell spoke of upside risks to growth. Although he said he didn’t want to prejudge where rates are headed next, he highlighted positive factors such as tax cuts and stronger global growth.

The idea of seeing higher borrowing costs weighed on stocks and commodities but not so much on bitcoin price. This was a bit of a surprise since bitcoin has been tracking these higher-yielding assets recently.

Then again, the positive sentiment spurring from the acquisition of Poloniex by Circle has probably propped cryptocurrencies higher. Investors are anticipating more mergers in the near future, thereby expanding the reach and use of these products and possibly resulting to an IPO down the line.

Looking ahead, any headlines on regulation or industry developments might be crucial to determining whether or not bitcoin can hold on to its gains. Keep in mind that economic data from the US has been mostly weaker than expected so there are still persistent doubts on the Fed’s tightening timeline.