Bitcoin has resumed its tumble after a shallow pullback to what appears to be the top of a short-term descending channel. Price didn’t even make it all the way to the top of the longer-term channel on the 4-hour time frame, indicating that sellers are eager to return.

The 100 SMA is below the longer-term 200 SMA to confirm that the path of least resistance is to the downside. This means that the selloff is more likely to resume than to reverse. Also, the gap between the moving averages is widening to reflect strengthening bearish momentum while the 200 SMA lines up with the channel resistance at $12,000.

Stochastic is heading south to show that selling pressure is in play. However, the oscillator is also dipping into oversold levels to signal exhaustion among bears. If they take it easy from here, buyers could still have a chance at hopping in an triggering a bounce to the nearby resistance levels.

RSI has been heading higher but has turned right back down to signal that sellers aren’t quite done just yet. In that case, more bearish pressure could take bitcoin down to the channel support around $5,000-6,000. 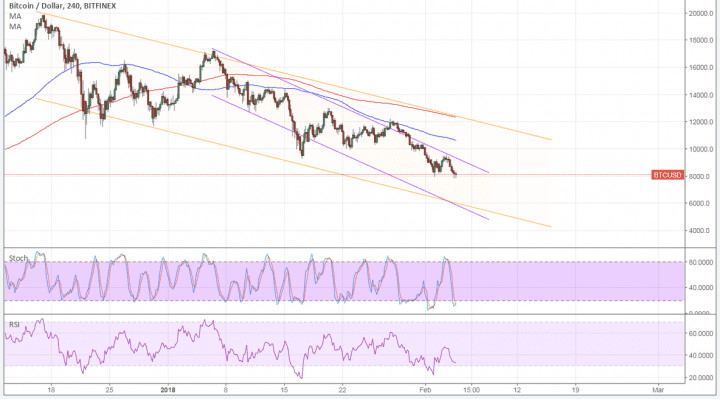 The US dollar enjoyed a strong boost from an upbeat jobs release on Friday, as the headline figure reflected a 200K increase in hiring and a stronger than expected rise in wages. This could keep consumer spending and inflation afloat, which would be good for growth prospects and a Fed rate hike.

Meanwhile, bitcoin is still reeling from another round of negative updates, including the news that banks are banning bitcoin buying through the use of credit cards. Among the institutions are Citigroup, Bank of America, and JP Morgan, and more could join in.

Regulators are still keeping a close eye on bitcoin as well, not just in the US but also in several nations wary of the nature of transactions and potential security breaches.