Bitcoin price continues to trend lower and is now beneath a short-term descending trend line visible on the 1-hour time frame. Applying the Fib tool on the latest swing high and low shows that the 50% level coincides with the falling resistance level and also a support turned resistance area around $9,000.

The 100 SMA is below the longer-term 200 SMA to confirm that the path of least resistance is to the downside. Price is nearing the 100 SMA dynamic resistance level that might be enough to keep gains in check. The 200 SMA is closer to the 50% Fib, but a higher retracement could hit the line in the sand at the 61.8% Fib or $10,000 handle.

Stochastic is already moving lower to confirm that sellers have the upper hand. RSI hasn’t quite reached overbought levels yet but is also turning lower to reflect a pickup in selling pressure that could take bitcoin down to the swing lower or lower. 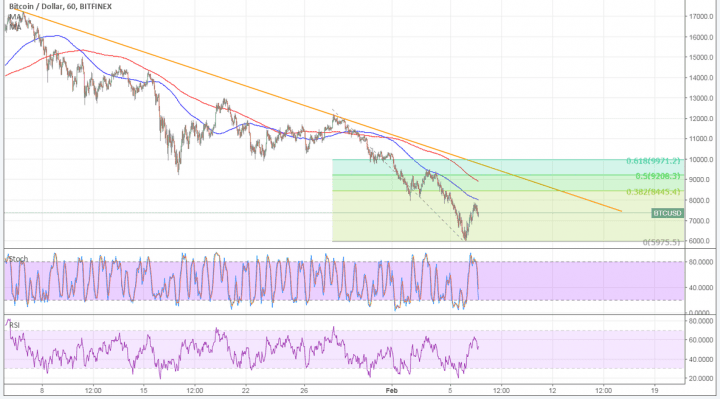 Risk-taking was evident in the financial markets in the latest trading sessions, but this could be a mere correction from the earlier slide. Recall that equities posted record declines, leading many to worry that the earlier rallies were too good to last.

This was being pinned on increased global tightening expectations, which could keep a lid on inflation and business activity. Interestingly enough, bitcoin and other cryptocurrencies appear to be tracking stock market performance or overall market sentiment.

Looking ahead, this kind of behavior could stay in play as there is a lack of major reports influencing bitcoin at the moment. Keep in mind, however, that the cryptocurrency remains under pressure due to ongoing crackdowns and the jitters from the recent exchange hack.

Apart from that, it doesn’t help that financial leaders are warning against bitcoin. The latest of which is new head of the Bank for International Settlements, Agustín Carstens, who said that bitcoin threatened to undermine public trust in central banks and posed a threat to financial stability.